The 2016 Flight Fleet Forecast predicts the delivery of 7,960 new twin-aisle passenger jets over the next 20 years, worth almost $1,285 billion in 2016 delivery values. Some 45% of those deliveries are predicted to go into the Asia-Pacific region.

This delivery total is almost double that of the current in-service fleet, which numbered just over 4,000 at the end of 2015, accounting for 16% of the total in-service passenger fleet, and over 30% of seats. The fleet is expected to more than double to 8,350 by 2035.

Annual deliveries have risen markedly in the recent past, from 150 in 2010 to over 350 in 2015. This increase has resulted from a catch-up from under-ordering in the early 2010s and launch of new generation programmes like the Boeing 787 and Airbus A350.

As the industry is in the middle of programme change-overs (A330ceo to Neo, 777 to 777X), the annual deliveries are now in a stabilisation phase and forecast to average 370/year in the next four years. The forecast increases to an average of 390/year in the 2020s, rising to 450/year by the end of the 20-year forecast.

The majority of the twin-aisle fleet serve long-haul markets, and this competitive sector is increasingly becoming the focus of innovation, with improvements being made in fuel burn, payload/range and passenger comfort. Hence, some 90% of the current fleet is forecast to be replaced in passenger service over the next 20 years, as airlines re-fleet with new types. Some 45% of deliveries will thus be for replacement.

The need to offer a competitive long-haul product affects the useful economic lives of twin-aisle types, which at present are observed to be shorter than that of single-aisle aircraft. Only 400 of the replacements are expected to be freight-converted, a lower proportion than in the past, principally in the Airbus A330/ Boeing 767 sizes. 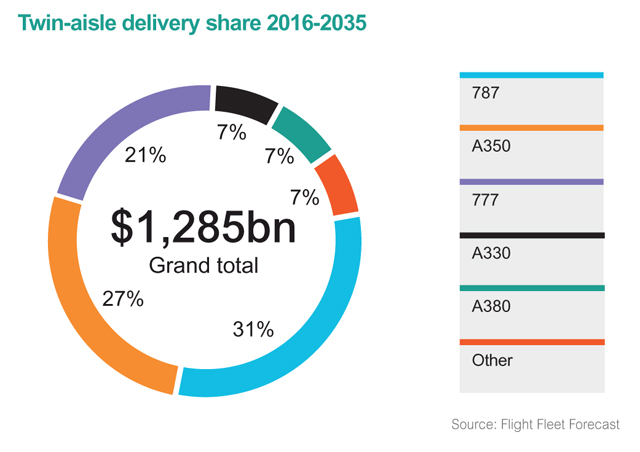 Over the forecast period, the smaller seat sizes (200-250 seats) will still account for over 1,850 deliveries valued at over $250 billion. The earlier-generation 767 and A330-200 will increasingly be phased out, while the deliveries are focussed on the 787. The 787-8 will be important for developing new routes and the larger -9 is replacing both smaller types and larger 300-seaters.

Midsize twin-aisle types in the 300-seat size are predicted to be the core of deliveries with a 43% share of the total at 3,450 aircraft and $500 billion in delivery value. The fleet of 300-seaters will grow by over 2,200 aircraft and the share of the fleet will rise by nine percentage points to 42%. The A330-300 has proved very successful in this sector and the A330-900neo will replace it on the line in the next two years. The A330neo will be in demand for medium/long-range routes including intra-Asia and China domestic routes.

As aircraft size increases, their operator base shrinks and this has implications for demand. In the largest-size category (400 seats-plus), the fleet has stabilised at around 450, but is forecast to see little growth over 20 years. The Flight Fleet Forecast was already anticipating that the A380 would see a production rate cut and that the 747-8 would end production, which looks increasingly likely.

Much of the forecast 400-seat-plus deliveries in this large size are dependent on an improved A380 version emerging from the mid-2020s. The A380 is suited for high-capacity routes into slot-constrained airports and for large hub-feeding operations into the Gulf. However, the largest twins have greater flexibility, competitive seat-mile costs, and greater belly cargo capacity.

The market is clearly focused on the new-generation A350, 787 and 777X products, which are expected to account for some 5,950 deliveries.

The twin-aisle sector remains a duopoly at present, with only Airbus and Boeing currently manufacturing and delivering passenger aircraft in this sector. The barriers to entry remain high, particularly for programme development costs, which will typically exceed $10 billion by some margin for a new twin-aisle passenger programme. Russia and China are co-operating on a potential new programme to develop a 300-seater in the 2020s.

There are also studies into small twin-aisles to bridge the gap above the larger single-aisles, but this forecast does not specifically include a new “middle-of-market” type. If one is developed, it would capture the market both from the largest single-aisles, and from the 787 and A330neo.