In the days of sail, the fear for the master of any tea clipper was to find the ship becalmed in the doldrums. The words doldrums, headwinds, fragile, sluggish, weakness, challenging and subdued have all been applied to the air cargo market during 2016. The half-year numbers indicate the problem, showing a 0.5% rise in traffic, measured in FTKs, on a 6% rise in capacity.

The lower fuel price has discouraged some carriers from reducing main deck capacity, while there has been increased belly capacity from 120 additions to the twin-aisle passenger fleet. The 170 deliveries were of types with much better cargo-carrying capability – including Boeing 777s, Airbus A350s and Boeing 787s – than the 50 older types they replaced. As a result, the industry-wide freight load factor fell to 42.5%, more than two points lower than the prior year’s. This is continuing to exert downward pressure on freight yields and revenues. 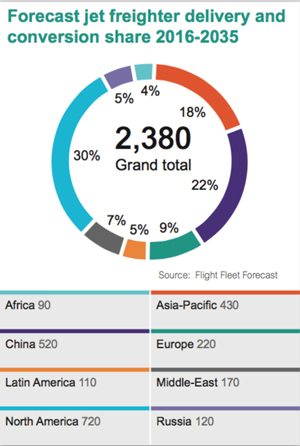 This year looks set to be one of modest growth, with IATA expecting just over a 2% rise in FTKs, in contrast to the more buoyant growth in passenger traffic.

Yet the air cargo market is far from homo­geneous. Speak to the converters of passenger aircraft and some of them have never been busier, with orderbooks filling up. New Boeing 767 freighters are being delivered in increasing numbers and e-commerce giant Amazon is now flying its own branded aircraft.

The long-haul cargo market is undoubtedly suffering from the weakness in global trade, with business surveys and export data offering little encouragement of any change in the short term.

The picture is a mixed one. Asia-Pacific airlines, which carry about 40% of traffic, saw a reduction of just over 2% in the first half of this year, albeit there were more encouraging signs by mid-year. The key Asia to North America market saw a contraction of almost 10% in the same period.

Cathay’s half-year results typify the issues facing those in the long-haul market – its traffic was almost identical but yields were down by almost 18%. Shipments from Hong Kong and China to the USA, which make up the majority of its traffic, faced severe pressure because of overcapacity. Another challenge was a weaker yuan, which hurt revenues from China.

There was some good news, including a strong rise in pharmaceuticals shipments, growing demand to and from the Indian subcontinent, and resilience with steady exports of electronics, machinery and perishable products from Northeast Asia.

European airlines saw growth of almost 4% for the first half, although fortunes were mixed. The European market is seeing increased competition, not just from Gulf carriers, but from Silkway, AirBridge Cargo and Chinese airlines, all taking advantage of cargo fifth freedom rules.

Lufthansa Cargo made a half-year loss of €45 million ($50 million) at the adjusted EBIT level, following a €50 million profit for the same period in 2015, on the back of a revenue decline of 19%. Although the German economy is highly export orientated, yields have shrunk to a level last seen in 2009 during the financial crisis. The carrier is considering reducing its MD-11 Freighter fleet and the group’s chief executive, Carsten Spohr, says: “I expect that we will have a smaller freighter fleet than today in several years.”

Cargo airlines are becoming more innovative and are co-operating with each other. For example, Cathay and Lufthansa will start a partnership and work together on network planning, sales, IT, service enhancements and ground handling. The Hong Kong carrier’s freighter frequency to Europe has dropped from 30 a week in 2008 to seven currently as it has lost market share to Gulf hub carriers. However, it has also been carrying more in its 777-300ER bellies. Middle Eastern carriers now account for 14% of the market and recorded more than 6% growth in the first six months of this year.

How is the market situation affecting new aircraft demand? The current order backlog of almost 130 is reasonable, although 70% is for a single customer, FedEx. The 2016 order intake has been modest at 13 in the first seven months, and 15 deliveries in the same period suggest that the 2015 delivery total of 45 will be hard to match.

New freighter deliveries have averaged 35 annually over the past decade and 2015’s higher total included 19 777Fs and 16 ­767-300Fs. The 777 is becoming an airline favourite with its 102t payload and twin-engined economics. FedEx is driving demand for new-build 767s as it replaces older types such as MD-10s.

There is, however, much less certainty over the future of the Boeing 747-8 Freighter and Airbus A330 Freighter. New deliveries in single figures for the past two years have led to 747 production being cut to just six a year, with Boeing talking for the first time about a possible end to production. Its high capacity (130t-plus) and nose door make it popular with certain carriers, including Cargolux and AirBridge Cargo. But a number of 747-400 Freighter operators have replaced them with 777Fs rather than upsizing to the 747-8F.

Airbus has delivered just 35 new A330Fs in seven years of production, and it remains a niche medium-capacity type, with market focus moving to the start of conversions.

Even though belly capacity is expected to account for about half of traffic going forward, demand for main deck freighters will still be a key component for world trade flows. Hence the 2016 Flight Fleet Forecast predicts 20-year demand for 860 new deliveries, with the 777F and 767F being the leading types. Later in the 2020s there is the likelihood of new freighter models based on the 777X and potentially the 787-9 and A350.

A bright spot in the cargo market is freight conversions, which is largely being driven by demand from integrators and e-commerce. The past three years have seen narrowbody conversions averaging at more than 50 a year, featuring a mix of 737-300/400s and 757s. FedEx, DHL and Chinese operators are taking 757s, with 737 conversions going to most world regions.

Focus is now moving to the next generation, with 737NG programmes launched by AEI, Boeing and IAI Bedek, and the A320 and A321 to be converted by PacAvi Group and EFW, an Airbus and ST Aerospace company. The first converted aircraft will be emerging in the coming 18 months. Launch customers include lessors such as GECAS and ACG, Chinese express operators and some smaller cargo carriers such as Colt Cargo and Cargoair.

Widebody conversions slumped to just 21 in the past three years, following the ending of 747 conversions and slower-than-expected ramp-up for the 767. The picture is now changing rapidly, with 2016 likely to see in excess of 20 conversions, with commitments for almost 40 more.

Much of this demand is arising from one of the big news stories of 2016 – Amazon’s launch of its own air cargo operation, Prime Air. It has agreed to wet lease 40 767s from Atlas Air and ATSG, a mix of -200 and -300 freighters, to support one- and two-day delivery for its US customers. This has created demand for up to 28 more 767-300ERs for conversion through 2018, with the first aircraft already in conversion at Bedek in Israel.

It will be interesting to see the longer-term impact of Prime Air on the established integrators such as FedEx and UPS. The former has absorbed TNT and is in the midst of fleet replacement, while UPS has yet to decide on any renewal of its 230-plus jet fleet.

China has also started taking converted 767s, with SF Airlines receiving Boeing BCFs converted by ST Aerospace. The A330 conversion programme at EFW received a boost at the Farnborough air show with DHL committing to the first four A330-300 conversions. The potential for a 777-200 conversion programme has been discussed for a number of years and Bedek says it is studying a launch.

Conversions will continue to be the main overall source of main-deck freighters, with the Flight Fleet Forecast seeing 20-year demand for some 1,530 jet conversions. Their lower capital cost of acquisition and conversion is critical to the economics, especially for lower-utilisation markets.

More than 70% of the conversions will be narrowbodies, with the 737-800 and A321 predicted to be the two leading types. In the widebody sector, the 767 is finally realising its potential, while the A330 is a key prospect for the 2020s as aircraft become available.

On a regional basis, freighter new-build and conversion demand will come primarily from North America (30%) where the integrators dominate the market, and China (22%), a linchpin for global trade seeing increasing domestic e-commerce (which will soon account for half of the global total).

Asia-Pacific’s share (18%) is primarily for long-haul routes. Europe will take comparatively few (9%) as the main-deck portion of the fleet has drastically fallen in recent years. Middle Eastern carriers are taking an increasing share of the Asia and Africa to Europe market via the Gulf hubs, especially through belly capacity, and will also take a 7% share of additional main deck aircraft demand.

For a summary of the Flight Fleet Forecast, clickhere