The 2016 Flight Fleet Forecast predicts the delivery of 42,800 new commercial passenger and freighter aircraft over the next 20 years. This drives a market for 86,500 installed engine deliveries, with the fleet in service growing from just over 60,000 engines today to 103,000 in 2035. The aerospace market is currently in the middle of introducing a significant number of new and re-engined aircraft programmes, with a consequent generational shift from well-established engine types to new families, which has a major impact on the engine aftermarket.

In terms of units, the largest market is medium-thrust engines for single-aisle aircraft. The fleet is forecast to grow from 28,500 engines at the end of 2015 to 61,000 in 2035, a growth rate of 3.9% per annum. Engine deliveries will be around 54,000. High-thrust engines for twin-aisle aircraft have a slower growth rate of 2.7% per annum, in part a result of the continued transition from four-engined aircraft to twins, with the fleet increasing from 12,700 engines to over 21,000, driving 18,500 installed-engine deliveries.

The regional aircraft fleet is set to grow much more slowly than the mainline fleet, with fewer aircraft moving into the freighter market, and many retirements. Regional jet engines, below around 20,000lb (89kN) thrust, will grow in fleet size from 7,500 to around 9,000 units, with the fleet of turboprops powering commercially operated aircraft increasing from 9,400 to 10,200. 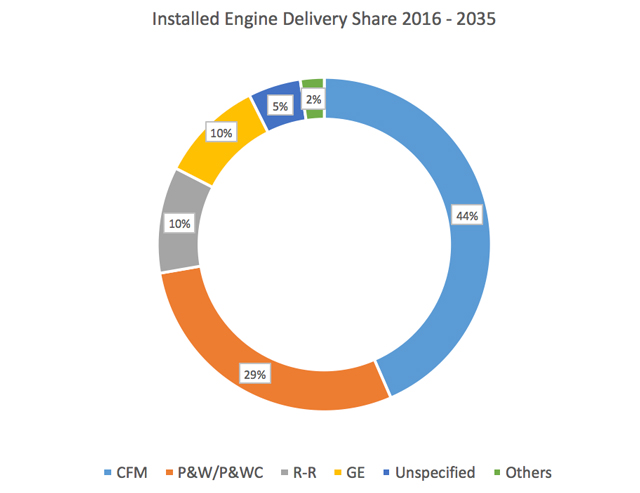 The strong growth of the single-aisle sector gives CFM a continued dominance in terms of installed fleet and deliveries, with the fleet of all CFM engines growing to around 43,000 engines in 20 years' time. In terms of units, Pratt & Whitney has the second-highest number of new deliveries and installed fleet, driven by the new PW1000G geared turbofan and established PW100 turboprop family of engines, with 25,000 engines delivered.

The high-thrust engine market, while smaller in unit terms, is worth around 40-45% of the total global market, by virtue of the much higher values for new engines, as well as the higher aftermarket revenue. Of the 18,500 new engines, Flight Ascend Consultancy forecasts that Rolls-Royce will gain the largest delivery market share, gaining 55% of the market.

The huge installed fleets of CFM56 and IAE V2500 engines in the single-aisle fleet will remain the largest until well into the 2020s, before they are overtaken by the new-generation PW1000G and Leap engines. They also remain the main opportunity for aftermarket growth and third-party revenues in the medium-term, since the new engines will require very few overhauls until the early 2020s. This is also true in the twin-aisle sector, where the Trent 700 and GE90 engines will be the biggest fleets for some time to come, before being supplanted by the Trent XWB and GEnx.

Aircraft retirements are a key driver of the engine aftermarket. Increasing retirements release engines into the market that can be used to postpone overhauls by using up remaining "green time". Engines can also be broken for spare parts, in particular life-limited components or blades that can be repaired, enabling lower-cost overhauls in the later stages of an aircraft's life.

A number of engines are now well into this stage of their lives, with hundreds already available from retired aircraft. This includes the PW4000 series, CFM56-3 and Rolls-Royce RB211 family. Flight Ascend predicts that there will be over 1,000 CFM56-5 installed engine retirements over the next five years, as well as 800 CFM56-7s, so for these popular types there will also be an increased supply of spare engines and serviceable used material in the coming years.

The Flight Fleet Forecast also has appendices available that forecast aircraft and engine utilisation over the next 20 years. For engines, this is very pertinent for understanding the aftermarket trend and value, as increasing numbers of engines are maintained on a dollar-per-flying-hour basis. In total, the commercial engine fleet flying hours will grow from 150 million hours in 2015 to 292 million hours by 2035, an average growth rate of 3.4% per year. The number of cycles performed increases from 73 million to 125 million, a slightly slower growth because of the continued trend of increases in average sector length.

The CFM56-7 fleet's flying hours will peak at around 39 million in 2019. It will be replaced as the most utilised engine type by the 737 Max's Leap-1B, for which hours will increase to over 60 million by the end of the forecast. In the high-thrust engine market, the CF6-80C is currently the most flown engine type, with eight million hours in 2015. The type will be shortly overtaken by the GE90 128-inch fan variant, but ultimately the Trent XWB will have the greatest number of hours and cycles performed in the sector, driven by its exclusivity on the A350.

Looking at the utilisation forecast by engine manufacturer, CFM will see its share of total hours flown increase from 39% to 42%. However, there will be some shift in hours from General Electric to both Pratt & Whitney and Rolls-Royce, driven by the P&W capture of key regional aircraft programmes and Rolls-Royce's success in the high-thrust engine sector. This results in GE's share declining from 22% of total hours to 13%. Thus, GE's focus will increasingly be on the single-aisle market via its CFM partnership with Safran. It is worth noting that Safran's share of hours flown, expressed as 50% of the CFM total, is a similar magnitude to the total Pratt & Whitney/IAE figure.

The engine market is in a state of change and there are two key challenges ahead. In the near term, the engine OEMs must deliver their new programmes on time and successfully manage the production ramp-ups. For aftermarket third-party providers, there will be a significant gap as established engine types enter their end-of-life support phase, with a focus on costs, while the new-generation engines remain in their early lives, overwhelmingly covered by OEM-support fleet-hour agreements.