INSIGHT FROM FLIGHTGLOBAL: How big is the MRO opportunity in Europe for 787 and A350?

The Boeing 787 and Airbus A350 represent a burgeoning opportunity for Europe’s MRO providers with the region expected to have the world’s second largest fleets of both types by the turn of the decade, based on current order books.

According to Flight Fleets Analyzer there will be almost three times the Dreamliners in service today by 2020. While Europe’s 261-strong fleet will lag that of Asia Pacific – predicted to have 470 787s in service by 2020 – it will surpass North America, at 232, and the Middle East, on 190.

While the A350 only entered service in 2014 and in Europe in 2015, the European fleet is set to reach 111 by 2020, almost 14 times this year’s total of eight. Again this total will be just over half the Asia Pacific fleet, which will have 215 examples of the Airbus twin-jet in operation at the beginning of the 2020s. 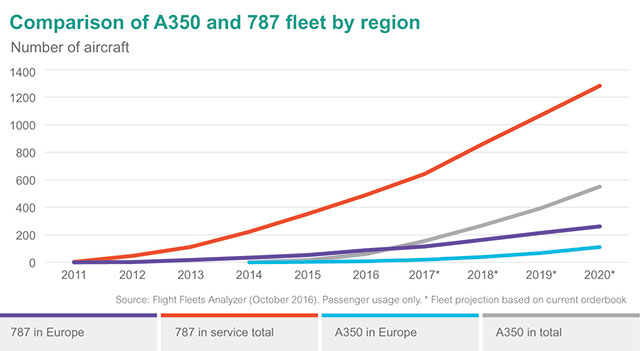 Flight Fleet Forecast – a separate independent outlook of the commercial fleet by Flight Ascend Consultancy – predicts 331 deliveries of 787s in Europe between 2016 and 2035, on top of the 53 delivered to 2015. However, Flight Ascend Consultancy expects global Dreamliner deliveries over the 20-year period to total just under 2,700, with almost half the demand coming from China and Asia Pacific.

The rival widebodies compete closely, although the three-type 787 range straddles segments between Toulouse’s A330/A330neo and its A350-900, while the larger A350 model, the A350-1000, nudges into territory occupied by Boeing’s larger twinjets, the 777/777X families.