Over the decades, cabin designers have become increasingly adept at squeezing a quart into a pint pot. For metric users that is the equivalent of compressing 1.136 litres into a 568ml container – well, nobody ever claimed that British Imperial measures were particularly logical, but you get the idea.

Airbus’s Space-Flex attempts to do more with less by making more efficient use of the space at the rear of the cabin. It replaces an A320-family aircraft's full-width rear galley with a smaller unit that occupies around one-third of the aft-facing surface, with the remainder of the space taken up by one or two lavatories.

This allows the two lavatories that are usually located on either side of the central aisle to be removed. The space liberated allows airlines to do one of two things: either give passengers a little extra legroom throughout the cabin… or to install up to three additional revenue-generating seats.

Airbus says that, so far at least, airlines that have specified Space-Flex have opted for the increased legroom option. However, do not be surprised if some carriers choose the higher capacity option.

Airbus says that the new lavatories with Space-Flex are larger than those on rival aircraft. The can also be configured to offer a full persons with reduced mobility (PRM) lavatory for the first time on a single-aisle aircraft. The larger, PRM-friendly model is installed by a simple process that converts the two single Space-Flex lavatories into one PRM unit. 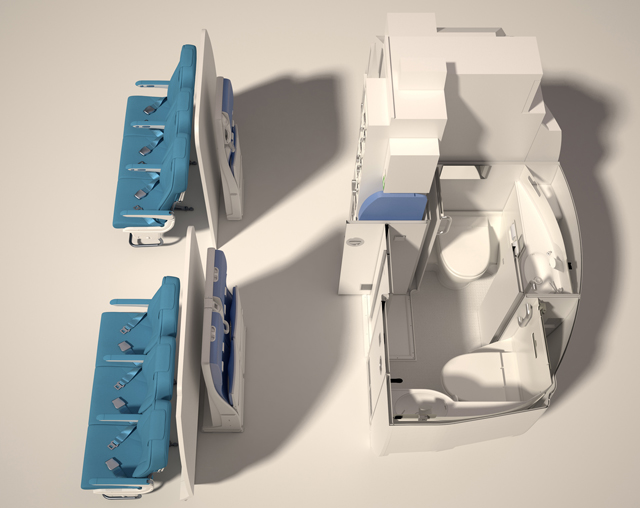 Space-Flex remains an optional configuration, but Airbus believes there will be a growing trend towards its uptake. Given the move by airlines in recent years to install slimmer seats so as to fit additional passengers into the space available, this seems a reasonable assumption on the part of the airframer.

European low-cost carrier Vueling took delivery ofits first A320 incorporating Space-Flex on 16 March. Configured in a single-class 186-seat layout, the A320 is the first of a 62 new narrowbodies due to be delivered to the carrier in coming years.

“We foresee a growing popularity for Space-Flex as it is a key enabler for more seats in the cabin,” says Airbus. “Since the launch of the A320’s increased exit limit, 70% of low-cost carriers/charter operators, having done their definition, have selected Space-Flex.”

Unsurprisingly, Airbus sought assistance from airlines on Space-Flex, both in validating the basic concept and then, at a later stage of the design, in fine-tuning volume and space allocation for the various components of the integrated unit. It was prompting from airlines that brought about the v2 version of the unit, as some carriers indicated that they needed to have greater trolley capacity, important when dealing with higher-density seating configurations.

The v2 version “builds on the in-service experience from Space-Flex v1”, says Airbus. “We believe that we have reached a solution that meets airline requirements and a complementary offer with either full PRM or simple PRM solution.”

Another proposed Airbus cabin option is still being considered by carriers. The manufacturer suggested in 2014 that it could provide cabins with varying seat widths. Some seats on the aisle could be made wider, at the expense of the other two places in a typical A320 row, to accommodate larger passengers. Needless to say, they would pay extra for the privilege.

“The Extra Wide Seat was presented as an idea to benefit from the A320 wider cross-section and offer airlines the opportunity for ancillary revenue generation,” Airbus says. “A lot of airlines have shown interest in this concept so far, even if no one has selected it yet.”

Whether this is because airlines think the Extra Wide Seat is unnecessary or because they do not want to irritate the passengers in the other, narrower seats is not clear.