What drew you to aviation?

I grew up in Peachtree City, Georgia, which has a heavy Delta Airlines employee presence. Most of my neighbours and friends’ dads flew for Delta. My dad was not a pilot but saw flying as a potential career path that might interest me and encouraged me to pursue a career in aviation. In high school, I was fortunate to have a close friend’s father teach me and his son how to fly a Cessna 152 piston-single. I had my first flight on 10 September 2001. The events of the following day put me on the path I am today. I knew after 11 September, I wanted to fly and I wanted to do so in the military.

Where were you trained?

I received my commission in the Air Force following my graduation from Georgia Tech and then attended Specialized Undergraduate Pilot Training at Columbus Air Force Base, Mississippi.

Where have you worked and served?

I worked as a lineman at Peachtree City Falcon Field airport. My primary job was to fuel aircraft and conduct basic aircraft servicing. While stationed at Columbus air force base, I deployed in support of Operation Enduring Freedom flying intelligence, surveillance and reconnaissance missions in the Beechcraft MC-12W, a modified King Air 350. Following my deployment, I returned to Columbus AFB to fly the T-6 Texan and eventually complete my introduction to fighter fundamentals training in the T-38C.

Following my assignment at Columbus, I attended General Dynamics F-16 initial qualification training at Luke AFB, Arizona and was subsequently assigned to Shaw AFB, South Carolina. During my assignment at Shaw I was deployed in support of Operation Inherent Resolve. At the end of my assignment at Shaw, I was selected to be the next Air Combat Command F-16 Viper demonstration team commander and pilot. A request was sent out via email seeking interested pilots to apply for the position. 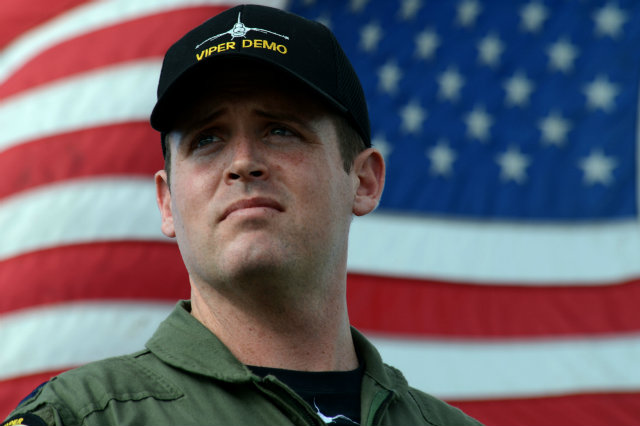 Are people inspired by the exciting demos?

What's the best part of your job?

While flying the F-16 is hard to beat, I truly enjoy interacting with young kids and hope to show them that if they work hard they can find success in their pursuits. I was fortunate growing up with several good role models and people that helped guide me to the path that I am on today. I view my opportunity to be a part of the Viper demo team as a means of giving back and a chance at hopefully inspiring the next generation.

What's most challenging about your job?

Flying demonstrations present unique challenges and keep me working. The profile lasts only 15min, but during that time I burn 6,000lb of fuel pulling 9g upwards of 15 times. Not to mention most of my flying occurs between 200ft and 500ft above ground level, at speeds ranging from 125kt to 620kt.

My last manoeuvre is our team’s dedication pass, which I fly at 300ft, 500+kt, and pull over 9g. This happens at the end of the display, when you are tired, and requires considerable focus and a good G-strain. At airshows I will typically follow the dedication pass with a rejoin to the wing of a WWII or Korea-era fighter from the Air Force Heritage Flight Foundation. This is a continued challenge as I will typically continue the 9g turn to deplete airspeed to rejoin 3ft from the wing of a priceless warbird. Transitioning from the Viper demo to the Heritage formation is a big transition, and keeps me working throughout.

How long would you like to be part of the team?

As the Viper Demo team commander and pilot, I am assigned to the team for a two-year rotation. I will lead the team through the 2018 season, then will train my replacement for the 2019 season.