INTERVIEW: Flying solo for a place in the history books

British-Nigerian Lola Odujinrin is the first African to circumnavigate the Earth solo in a single-engined aircraft. He describes this feat – which he undertook without the help of a conventional support team – as "by far my greatest achievement in aviation".

My interest in aviation and space exploration started at a young age and I thought it was cool and prestigious to work as a pilot, as I considered them to be very intelligent and capable. This interest was further amplified by my inquisitive nature, my curiosity about toy mechanisms and making kites by the age of 10. It was through flying kites that I gained an understanding of the concept of aerodynamics, which for me evolved into the ultimate goal of wanting to fly aircraft. This interest then became an ambition when I had the privilege of flying with my uncle in the cockpit of a BAC1-11 at the age of 14. Being able to fly to various parts of the world, experiencing different cultures and people has been a perk of being a pilot.

What have been your greatest achievements?

Being able to solo circumnavigate planet Earth in a single engine aircraft without a conventional support team is by far my greatest achievement in aviation. Upon successful completion of the flight, I became the first African and ninth British person since records began in 1933. The fact that more humans have been into space than flown around the world solo suggests the difficulty involved in such a feat. Not only was I able to succeed against all odds, I was able to discover the depths of my inner strength. 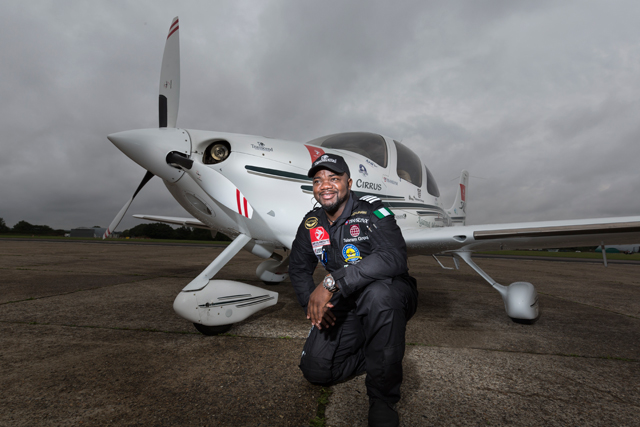 What were the highlights and low points of flying solo around the world?

Flying around the world is no doubt an adventure that would test the tenacity of any individual, both mentally and physically. During my journey, I experienced the full cycle of emotions ranging from optimism, denial, acceptance, despondency to, eventually, exhilaration. There were times I was clueless and finding solutions to imminent challenges seemed impossible. The most obvious obstacles were the legal and logistical challenges of squeezing enough fuel on board an aircraft designed to fly for 4h to last for around 19h, as well as getting all necessary permits.

I will always remember the emotions I experienced getting over the hurdle of flying from Hawaii to California – a journey of around 2,210nm (4,100km) in about 16h in icing conditions during March 2017. I took off from Hawaii at 01:00 local time into what was a very dark moonless night and flew for around 15h without normal VHF radio contact with air traffic control. My high-frequency radio had packed up shortly after departure and my only means of communication was through text message from a satellite phone to Oakland Centre via London. The aircraft was very heavy and as such had to be manually flown without the help of the autopilot. There was very little room for error as I had to fly to 2˚ of accuracy. Pitching 4˚ meant the aircraft sank and pitching 7˚ meant it was stalling. I had to hand fly, balance fuel periodically and communicate on the satellite phone. Things only started getting easier after around 6h, when the aircraft's weight had come within its designed normal operating parameters.

However, the challenge was not over, as I was constantly trying to avoid icing and at the same time trying to fly a great circle distance. There was a feeling of elation once I got closer to the US mainland and was able to make contact with an ATC controller 81nm off the coast of Los Angeles. I knew at last that I could at least report my position should anything go wrong. This was after 15h of no contact with the outside world, apart from the odd airliners flying overhead at 37,000ft, who were understandably shocked to hear a single-engined aircraft on VHF cruising along at 11,000ft in the middle of the Pacific Ocean!

It was a welcome relief when the tower at Tracy Municipal airport, in California, said the most favourite pilot phrase: "cleared to land". The next-closest feeling to what I had experienced crossing the Pacific Ocean (Australian east coast to US west coast) was landing back into Dulles airport in Washington DC, when the tower controller said "welcome home, earthrounder", and being welcomed by a fire-service water salute.

Low points of the adventure were managing weather delays and mechanical breakdowns. I only ever saw the effects of the Southeast Asia monsoon on television, but witnessed this first hand during my round-the-world trip. As a result of the monsoon, I was significantly delayed for weeks, both in Thailand and Australia, adding substantial financial costs to the project. Other unnerving parts of the journey were flying close to conflict zones, being exploited by foreign suppliers and agents and suspected of being a spy. 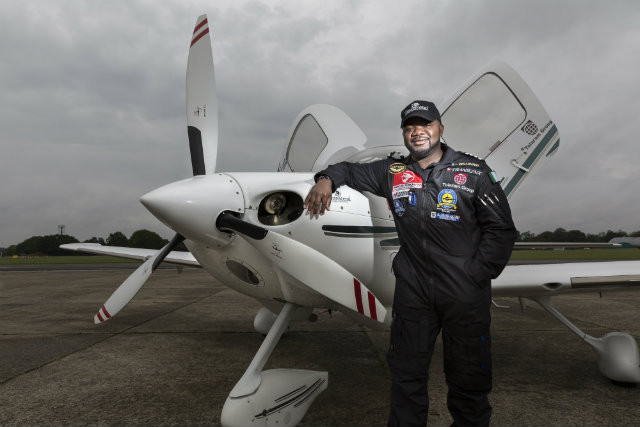 What is your day job?

I currently work as an airline pilot for Jet2.com, where I fly the Boeing 737-800 out of Stansted airport to various European destinations. My typical day would start by arriving at least an hour and a half before each flight to complete all necessary paperwork, meeting the rest of the crew and inspecting the aircraft before flight. Jet2.com boasts of a friendly culture and as such I interact with happy holiday customers and have the opportunity to show kids the flightdeck. This role allows me a good work-life balance as I am usually home every night.

What are your ambitions?

My goals include breaking more aviation records. However, the most significant achievement would be to be able to give something back to young people, especially those from less-privileged backgrounds.

I have plans to set up a simulator flight-experience centre for kids wanting to have an idea of what flying an aircraft feels like. Times have changed and, while I had the opportunity to sit in the cockpit of an aircraft in flight growing up, kids do not get that privilege these days.

My next record attempt will be a high-altitude flight in an unpressurised single-engined aircraft to around 60,000ft. Updates on this will be on my website.

Where do you see yourself 10 years from now?

I see myself still working in aviation and hope that I’ll have been able to inspire more young people to want to join, especially if they come from less privileged backgrounds. I'd love to have taken on more aviation challenges and found ways of collaborating in interesting and exciting aviation projects. I'm also hopeful that in the future, we'll see the industry becoming a more diverse and inclusive space that offers opportunities to people from a broader range of backgrounds.