Two months in, the Irishman appears to be right at home with Malaysia Airlines (MAS). It helps that he was already chief operating officer before the promotion, and has a clear vision of what needs to be done to get the carrier back in shape: maximise revenue, minimise costs, keep the airline safe and, most importantly, to keep employees' eye on the goal.

The target is to achieve breakeven by the fourth quarter of 2017, and to be profitable for the full year in 2018. Thereafter, it plans to relist on Malaysia’s stock exchange by March 2019.

Since embarking on its restructuring, MAS has aggressively cut loss-making routes, leaving it with a largely regional network where its longest route is a direct service to London.

“Right now we need to focus on rebuilding the company into profitability. The least risky and fastest way to do that is domestic, ASEAN and regional operations. So that’s what the focus will be until 2019,” Bellew tells FlightGlobal in an interview in Chengdu, where he was attending the annual World Routes event.

It is a “no brainer” that the airline needs to add widebody capacity on services to Hong Kong, China and India. On the narrowbody front, work is ongoing to raise utilisation from under 10 hours to about 12 hours, essentially giving it the capacity of six additional single-aisle jets.

The former Ryanair executive points out that China “is a very obvious market”, and that MAS also needs to start more services from other parts of Malaysia such as Penang, Kota Kinabalu and Kuching, since it has been “Kuala Lumpur-centered for the longest time”.

His focus on China can perhaps be seen from his strong showing in Chengdu, where he busied himself meeting airlines and airports, and was the subject of a keynote CEO interview. He also took time to chat with foreign and Chinese media. 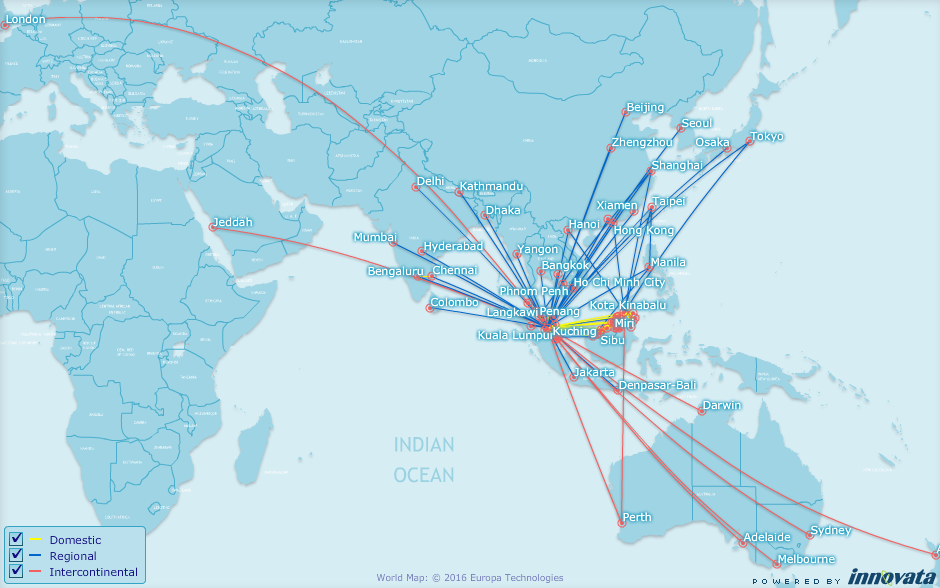 Bellew stressed that starting long-haul services is “not on the drawing board” at the moment, and that the airline would only re-enter the segment after 2019, should “all the figures line up”.

He believes that there is “plenty of business” for the airline to grow to a fleet of about 100 aircraft, up from the current 74, by around 2021.

MAS can take extra Boeing 737s and Airbus A330s at short notice and be profitable deploying them since its network contracted “very hard” during its restructuring, leaving gaps, he says. The airline is hence in the market for three to four A330s over the next 12 months, to add to its fleet of 18.

“There’s another carrier operating in Malaysia with 18 A330s, and these are 18 A330s that MAS should be operating and should never have let that competition get off the ground. It’s quite obvious to me that there’s an opportunity there that we need to take,” says Bellew, referring to long-haul, low-cost rival AirAsia X.

The airline could also order the A330s new if prices after financing do not differ drastically from secondhand ones, and also needs to start looking at replacements for its existing A330s. “But we will only do it (order new aircraft) if we are absolutely sure that it’s going to make a profit. I’m not going to take any chances,” he adds.

MAS' focus has moved from the initial cost cutting and redundancies to actively managing revenue and load factors. While its loads in the last two quarters were in the high 60s, Bellew says this has improved significantly in the current three months. Advanced bookings for the next six months have also grown 6-7% in the economy section, and more than 20% in the business section.

Asked how MAS can compete against the likes of AirAsia, he says: “What you do is optimise business class travel, and down the back use modern revenue management tactics to offer very low fares at the rear of the cabin and graduate prices up.”

The full-service carrier is however still disadvantaged with charges at Kuala Lumpur International airport being considerably higher than those at KLIA2, where the AirAsia group operates. Change could be in the air, after criticism by both MAS and IATA on the differences in charges despite facilities at both terminals being broadly similar.

A bigger problem on its hands, however, are the six A380s which it wants to phase out in 2018. Bellew understands that the airline will need to be “a bit more imaginative” on how it markets the aircraft. He believes the high-capacity jet will be well-suited for Chinese carriers’ use between major hubs such as Shanghai and Beijing, freeing up precious slots for more profitable long-haul routes to North America and Europe.

“If we can configure the aircraft to fly 570-600 seats, then suddenly the risk is very minimal for Chinese operators to wetlease the aircraft,” he says, adding that the airline could also provide support and maintenance for the jet.

Bellew also disclosed that the airline has been approached by investors who are looking to get an early foot in, before the airline’s valuation rises, although MAS has no issues obtaining financing.

Looking forward, he says: “My priorities are to maximise revenue, minimise costs, keeping the airline very safe, to put bums on seats and fill those planes at a good average fare.. the confidence is back within the company and that becomes somewhat infectious.”