Describing Paulo Kakinoff's job in the past few years as challenging would perhaps be an understatement.

Not long after he was appointed as Gol chief executive in July 2012, Brazil's airlines began the slow slide into a years-long recession marked by political uncertainty, falling travel demand and currency depreciation. 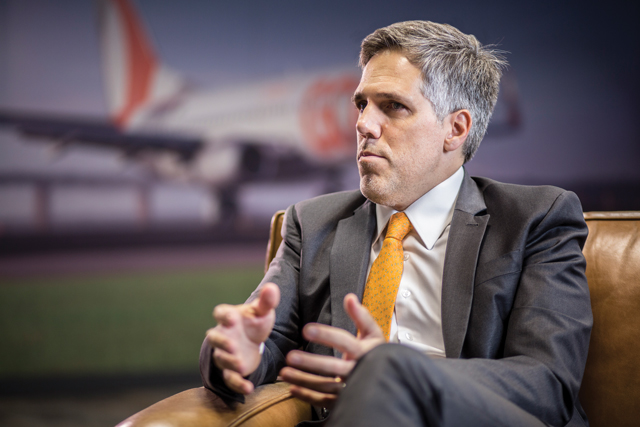 Gol deferred dozens of aircraft deliveries and shrank its network as part of a restructuring effort that saw it emerge as a leaner organisation. The airline has 15,000 employees today – 6,000 fewer than in 2012, when it had freshly acquired Webjet.

Following five straight years of net losses, Gol finally turned a corner in 2016, reporting a net profit of R1.1 billion ($339 million). Kakinoff, the only Brazilian airline chief executive who has remained in his job since before the downturn, has even more reason to be optimistic now as he points to a confluence of factors in the Brazilian market environment in the year ahead.

"We have combined, for the first time in decades, low interest rates, low inflation rates and a positive GDP," he says. "That's quite a relevant contrast in comparison with the last five years when the country was suffering terribly through the political instability and economic crisis."

A complete turnaround for the country's businesses will not happen overnight, he cautions. The debilitating effects of the recession could take "some years" to completely shake off. "We have some industries that went back to 2004 levels of performance, others to 2012. To have the country performing at the same level in all segments is going to take some years."

However, Kakinoff is upbeat when it comes to recovery among Brazil's airlines. Capacity discipline will contribute to stability, he points out. A majority of scheduled capacity is operated by three listed carriers – Azul, Gol and LATAM Airlines Brazil – which are all committed to delivering shareholder returns.

"We have almost 90% of the Brazilian airline capacity being deployed by publicly listed airlines, all committed to maximise their results and earnings, while improving their products and services," says Kakinoff.

"This means we have a more mature industry in Brazil aiming for the same goals. This all leads to a healthy airline environment, so I strongly believe that the combination of these factors is building a promising year."

Amid a restructuring effort to cut costs, Gol also embarked on a plan to change its business model, seeking to appeal to higher-yielding business passengers. In 2016, the airline surpassed LATAM Airlines Brazil to become the country's largest carrier in terms of traffic, data from Brazil's civil aviation authority ANAC shows.

"We focused in a disciplined way to deploy our strategic planning in 2012," he says. "It allowed us to simultaneously cut costs dramatically while improving our revenues by attracting more corporate travellers, who are paying three to five times higher fares than the leisure customers."

Gol now considers itself a hybrid airline, rather than the pure low-cost carrier it had previously identified as. It has focused on growing frequencies at key Brazilian cities such as Sao Paulo and Rio de Janeiro and boosting its market position at other important airports. 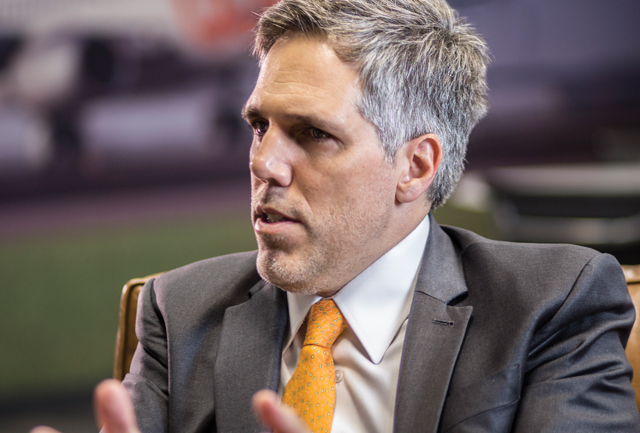 The drive to appeal to corporate customers is not merely a network game, as airlines are aware. Gol has worked in recent years to add business travel-friendly touches to its onboard product, including seats with additional legroom and a premium class on international flights where the middle seats are blocked off.

The airline has also equipped its fleet with wi-fi, in-seat power and USB outlets. On the ground, premium passengers can access lounges at airports in both Sao Paulo and Rio de Janeiro.

Gol's efforts to attract more corporate passengers are showing results – such traffic now makes up almost half of its passengers, up from about 35% to 40% in 2012, says Kakinoff. The airline plans to raise the level further, although he declines to specify the target Gol has in mind.

With brighter prospects in its home economy, Gol is returning to fleet growth this year as it takes delivery of its first Boeing 737 Max aircraft. The airline will add six 737 Max 8s this year, with the first to arrive in June. Gol has an order for 120 737 Max aircraft, and has also reached a deal to lease five additional 737 Max 8s from GECAS. Deliveries from Boeing run until 2026.

The new aircraft will drive Gol's overseas growth, an area where it cut back significantly during the Brazilian downturn. "The first four years of deliveries will basically be dedicated to expanding our international network," says Kakinoff.

Gol has already announced plans to resume US service, which it dropped in early 2016. The airline will return to Miami and Orlando, serving both cities from Brasilia and Fortaleza. While Gol had previously flown to the two US cities from the Dominican Republic, it will now be able to operate nonstop with the 737 Max.

"With this new technology, we can fly 15% longer distances than our current [737]NGs," says Kakinoff. "The 737 Max will not only replace the 737NGs and allow us to capture a lower fuel consumption and translate it into a lower CASK, it will also help us improve the current results of the long-haul flights we are operating today, flights that are around six hours long. We will be able to address new destinations that were not technically reachable with the 737NG."

Kakinoff declines to specify the international destinations within the Americas that Gol is eyeing new service to, although chief financial officer Richard Lark had previously pointed to Havana, Cancun, Panama City and Lima as possibilities. 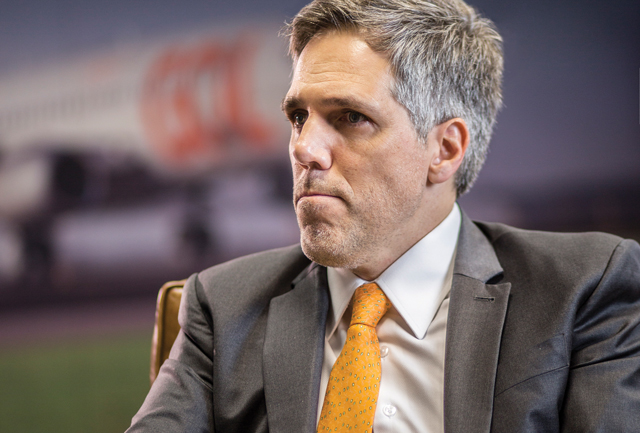 Gol's current international network is small compared with its competitor LATAM Airlines Brazil. Only about 15% of its network is outside the country, including a handful of cities in neighbouring Argentina and a few others in South America and the Caribbean.

Aside from helping Gol grow its presence outside Brazil, the 737 Max will play a role in enabling its planned joint hub in Fortaleza with partner Air France-KLM. Planned to open by May, the hub will serve as a connecting point for the European airline group's flights to Fortaleza, which will begin operations during the same month. KLM will launch thrice-weekly flights from Amsterdam while Air France's new lower-cost affiliate, Joon, will begin twice-weekly services from Paris Charles de Gaulle.

Gol, which currently operates up to 36 daily flights to and from Fortaleza, plans to raise this to about 50 and will base five aircraft at the airport in northeastern Brazil. The connections to the new European flights will save travellers considerable time, says Kakinoff.

While Gol has observed demand for Europe-bound flights from northern Brazil, only a handful of European airlines operate nonstop to the region and no Brazilian airlines offer Europe flights from the northeast.

Gol's vice-president of planning, Celso Ferrer, has said the joint hub with Air France-KLM in Fortaleza will allow the airlines to concentrate the European demand in a single airport that would otherwise not be sustainable from a single northeastern Brazilian city without significant domestic feed.

Plans for the Fortaleza hub come at a time when the country's airlines are taking a fresh look at Brazil's northeast, which Kakinoff and other airline executives have identified as a growth region in the coming years. "It is a region which shows the biggest market opportunity in Brazil considering the lower penetration of the airline segment," says Kakinoff.

The Fortaleza hub marks a deepening of the relationship between Gol and Air France-KLM, following the European group's $100 million investment in Gol in 2014. Kakinoff says the idea of a joint hub came out of a working group between the two airlines. "After studying and deeply analysing the Fortaleza plan, we came to the conclusion that not only did it have clear potential to develop new borders for our partnership, the market itself proved attractive for investment."

Gol's relationship with Air France-KLM is among the close ties the Brazilian carrier has with SkyTeam carriers. Delta Air Lines has a 9.5% stake in Gol, after investing $100 million in its Brazilian partner in 2011.

Despite its links with SkyTeam airlines and the Fortaleza tie-up, Gol says there are no plans for the airline's foreign partners to raise their equity stakes. Nor has the carrier found it compelling to join SkyTeam or an airline alliance, says Kakinoff.

"We already have an important constellation of partners engaged with Gol through different contracts and partnership models," he says. "In comparison, joining an alliance would not necessarily change dramatically the revenue opportunities we would have."

Kakinoff emphasises that any evaluation of alliance membership will be done from the perspective of how the airline can better serve its customers. "But we didn't find the proper way to build an interesting business case which would make us take the decision to join an alliance. It's not compelling at the moment."

While Gol may not be keen on joining a global airline alliance, it appears to have its sights set on growing its business through consolidation. Even as industry players have expressed surprise at the lack of consolidation activity during the Brazilian recession, Kakinoff indicates that Gol sees opportunities going forward.

"I do believe there is room for further consolidation," he says. "We want to work to have our airline in a position to play a major role in consolidation whenever there are opportunities."

He declines to be more specific, saying only: "We are analysing all of the possible scenarios at the moment."

With Brazil's air traffic set to return to healthier growth rates, Kakinoff is hopeful that the country will soon make progress on plans to privatise more airports. "There is a large number of airports that are in need of investment to achieve higher productivity levels and customer service," he says. "Through this, the country will be able to capture the potential of high growth rates."

Jet fuel prices and taxes in Brazil – among the highest in the world – remain the "biggest barrier" for the country's airlines, says Kakinoff. However, he hopes that recent government policy changes for the airline industry could signal relief in other areas for the country's carriers. 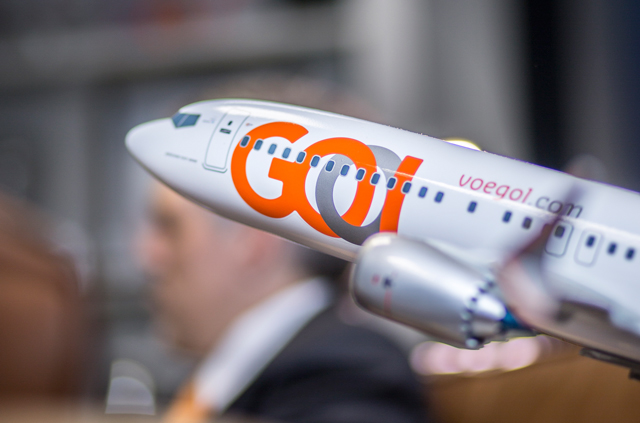 "The decision has brought the Brazilian market in line with more modern regulations in the airline segment," he says. "We believe that the biggest gain is allowing the customer to pay for what he is going to use, and that makes our fares even more attractive for the customers."

Kakinoff says it is too early to outline the benefit to the airline's ancillary revenue from the policy change, but he believes it will contribute to the carrier's plan to further stimulate air travel demand.

Even though Brazil is already among the world's top domestic markets, Kakinoff says there is still immense potential to grow traffic further. "Among the current 200 million inhabitants in Brazil, around 30 to 40 million travel on a regular basis. The number shows how big the potential growth is," he adds.

With Gol's current market position and strong standing among business travellers, he believes the airline is placed well to capture that growth.

"This is not me describing wishful thinking," says Kakinoff. "We have a unique selling proposition with our onboard product and a network which has no parallel."