India's Vistara has a clear aim – to fly beyond the subcontinent’s shores and be its premier full-service international carrier, backed by a strong domestic presence.

Speaking to FlightGlobal at its headquarters in Gurgaon, New Delhi, Vistara's chief executive Leslie Thng says that launching international services "will be key" for the Singapore Airlines-Tata Group (49:51) joint venture in 2018.

"Our mission from day one is to go international, using the domestic market's size and more importantly, feed, for our international operations," he explains.

Seconded from SIA, Thng will be the key driver of Vistara's next phase of growth. The SIA veteran was formerly chief executive of the mainline's regional arm SilkAir, as well as the chief commercial officer at Budget Aviation Holdings, the parent company of low-cost unit Scoot.

Thng says SilkAir and Scoot had an international focus from the onset "simply because Singapore does not have a domestic market". Vistara, in contrast, is in a market with tremendous potential.

"Singaporeans, with a population of 5 million, travel on average quite a few times a year, be it for leisure or business. Whereas for India, its population is 1.3 billion and the percentage of people who have actually travelled by air is only about 3%… We are very optimistic about how we can tap this growing market."

That said, for an India-based carrier to be eligible for international operations, it must first have at least 20 aircraft in domestic service. Previously, regulations required that airlines must have been in service for at least five years, as well as maintain a fleet of 20 aircraft, before they could ply international routes.

Vistara, which began operations in January 2015, had welcomed the policy change in 2016.

Flight Fleets Analyzer shows that the carrier operates a fleet of 17 Airbus A320s, including four Neos. It has another three of the re-engined narrowbody type on order. Thng says the carrier's expansion has been "quite aggressive" for a start-up, considering its induction of five to six aircraft annually.

The carrier is now scheduled to receive its 20th aircraft by the end of March, after which it will begin the application process to go international. It expects to induct its 21st aircraft in May and its 22nd a month later.

Vistara had previously announced that its first international destination would be launched in the second half of 2018. Thng reveals that this will be a medium-haul route "of between five to nine hours". Pointing to this, he suggests the carrier will acquire widebodies, since such services "would require a different aircraft type".

Local media reports have mentioned the Boeing 777 and Airbus A330 as possible future purchases by the carrier. The reports add that the airline is looking to order up to 100 aircraft, about half of which will be widebodies.

"These are opinions and speculations that we have not commented on," Thng says, adding that Vistara is still "looking at all aircraft types that can meet [its medium-haul] mission" and that the financing model for the next phrase of its fleet growth is still under evaluation.

Thng says the majority of Vistara’s international operations will be launched out of its main base at Delhi Indira Gandhi International airport, but that the carrier also plans to fly internationally out of secondary hubs in Bengaluru and Mumbai.

The caveat, however, is that its overseas expansion must be closely tied to the growth of its domestic footprint.

"We know our domestic network is not extensive enough in terms of reach, but at the same time we want to bring Vistara as a brand to overseas markets," says Thng. "Our footprint on the international market will grow simultaneously with the domestic front. We want to be considered an international airline with a strong domestic network to support feed profile." 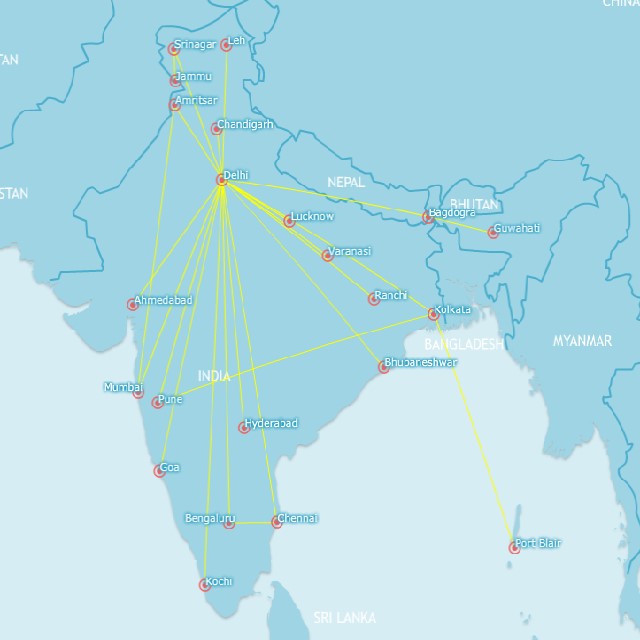 An example of this is its recently launched Delhi-Chennai service. The daily service will be raised to twice-daily from 1 March. Vistara will also launch a daily Chennai-Port Blair service from 1 March.

While building up "critical" trunk routes to give business travellers more options, the carrier will also look to more tier-two and tier-three destinations, tapping into their booming economies and rising spending power.

Thng acknowledges that Vistara faces stiff competition on the domestic market, but says the carrier has managed "a decent market share in tier-two and -three cities" despite being in operation for only three years.

"India is big enough that different airlines with different business models can carve out a niche for themselves, and they must be able to have an effective strategy to target their own market segment."

FINANCIAL PERFORMANCE ON THE UP

While Thng discloses that Vistara is yet to be profitable, he says its financial performance has "improved year-on-year", with CASK and RASK "moving in the right direction".

He also concedes that Vistara's CASK is higher than the low-cost carriers' in the market. This is however within expectations as the airline does not yet have scale in terms of fleet and network. With growth, he is confident that costs will also fall.

For now, Vistara is exploring ways to improve ticket distribution and to streamline internal processes to bring CASK down. The carrier also expects RASK to improve when international services are launched, and as it works more closely with airline partners to provide feed when connecting at Delhi airport.

Besides cross-participation in frequent flyer programmes and interline partnerships with the SIA Group, Vistara has interline agreements with Air France, KLM and Japan Airlines. It also recently signed a memorandum of understanding with JAL to explore a codeshare pact and frequent flyer partnership, possibly at the start of fiscal 2018.

Although load factor over the past 12 months has climbed 10 points year-on-year to 85%, Thng says yields are still "not satisfactory". As such, the carrier is "working hard" to improve take-up of premium economy and business class seats, as well as to boost its ancillary revenues by offering options such as travel insurance.

Nonetheless, Thng is confident that as India's economy grows according to forecasts, Vistara can make its full-service product attractive to local passengers.