By Peter La Franchi in London

The Israeli air force has shot down a Hezbollah unmanned air vehicle in a night-time air-to-air engagement off the coast of Akka on the Bay of Haifa, northern Israel.

The wreckage indicates the UAV was an Iran Aircraft Manufacturing Industries (HESA) Ababil-T delta-wing, twin-tail, pusher-propeller aircraft. Hezbollah has claimed since 2004 that it is able to field an armed UAV. The Israeli defence force confirms that the UAV "was Iranian", but "as far as we know it was not armed". The UAV was engaged 10km (5nm) offshore by a Lockheed Martin F-16C.

US sources say the Ababil-T, which has a small thermal signature, was shot down last week using a Rafael Python 5, the air-to-air missile's first operational kill. Israeli defence force thermal imaging video of the engagement shows the missile hit the UAV at the rear and the airframe broke up, some burning, before hitting the sea.

The engagement "lasted less than 10min" says the Israeli defence force, "including the identification and interception stages".

The Israeli air force's "northern air control unit identified the craft before it crossed the border and dispatched aircraft to intercept it. The UAV was shot down at a low altitude over the Mediterranean Sea, and Israeli naval vessels collected its pieces", the defence force adds. 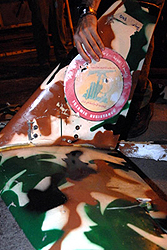 The UAV was launched from within southern Lebanon. The wreckage shows that the port tail carried a Hezbollah roundel with the English language words "Islamic resistance".

The Ababil-T in its standard configuration carries a daylight television camera as well as a medium-sized, high-explosive warhead. The UAV was flying at night, indicating its sensor package has been modified to include an infrared system.

The Ababil-T is launched witheither a catapult or a rocket booster, with the reconnaissance and target versions of the UAV family recovered using either parachute or belly skid landing. The UAV is 2.9m (9.5ft) long with a wingspan of 3.5m. Maximum take-off weight is 80kg (175lb).