The Israeli air force hit at least 10 targets in Syria on 7 December, with Syrian television reports indicating that air strikes were conducted near Damascus International airport and in the town of Dimas, near the Syrian-Lebanese border.

According to foreign sources, the air strikes targeted an arms depot, which caused huge blasts near Damascus airport. Residents in the Syrian capital were reported to have heard loud explosions. Israeli combat aircraft also bombed areas near the smaller airport at Dimas.

The sources suggest that the raid at Dimas targeted shipments of Iranian-made surface-to-air missiles, which were in Syria on their way the Hezbollah militant group in Lebanon. 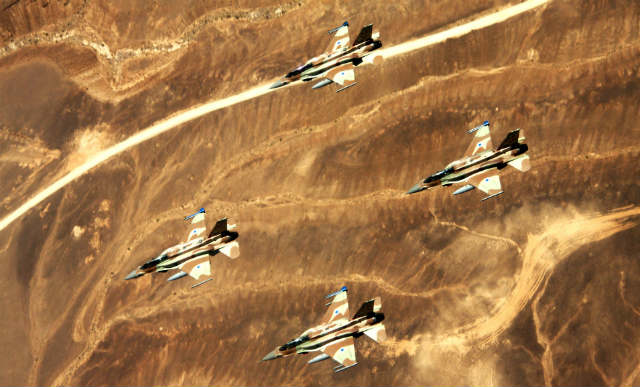 Israel’s air force has carried out several air strikes in Syria since the beginning of the civil war there. Foreign sources claim that these were performed in order to stop the flow of Iranian-made weapons to Lebanon. In May 2013, at least two targets in Syria were attacked twice within 48h, according to Syrian media reports. Sources suggest that the targets in those cases were storage centres for Iranian Fateh-110 long-range rockets that were being shipped to Hezbollah in Lebanon.

Israel has repeatedly warned that the transfer of what it describes as "game-changing" weapons to Hezbollah will mean crossing a "red line".

On 6 September 2007, at least four of Israel’s Lockheed Martin F-16Is and four Boeing F-15Is crossed the Syrian border to conduct a night-time raid which destroyed a nuclear facility located near the city of Deir-ez-Zor, foreign sources say.