Israeli company APG has unveiled a new vertical take-off and landing (VTOL) unmanned air vehicle, with the "Peres" (Hebrew for "vulture") having a tandem wing configuration and four electric motors.

Using a hybrid power pack system, the UAV has an overall length and wingspan of 4m (13.1ft) each. 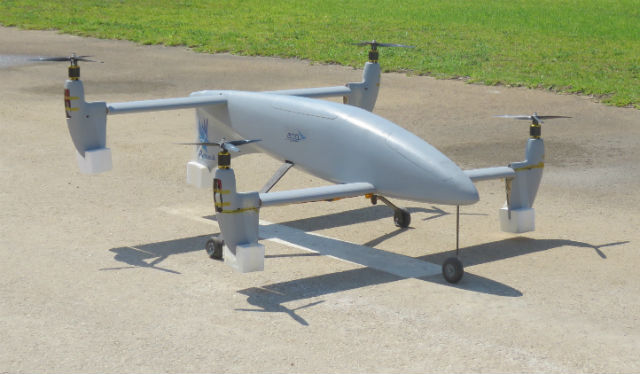 All four engines are used for take-off and landing, while in forward flight the UAV uses only two.

Dubester believes the new design will solve a major problem for navies which need to acquire an unmanned platform for operation from their ships. "With a maximum take-off weight [MTOW] of 220kg [485lb] and an endurance of 12h, this is a perfect solution," he says. The system offered for such duties uses a kerosene engine to enhance safety.

The family of Peres products will range from a system with a 20kg MTOW up to the largest model already being tested. This has a maximum payload capacity of 20kg, according to its developer.