The aircraft took off today from Lajes Field on Portugal’s Azores island group at 7.30am local time before turning south over Canada to touch down at Naval Air Station (NAS) Patuxent River in Maryland at about 2.24pm on 5 February – approximately 7h and more than 2,000nm later. 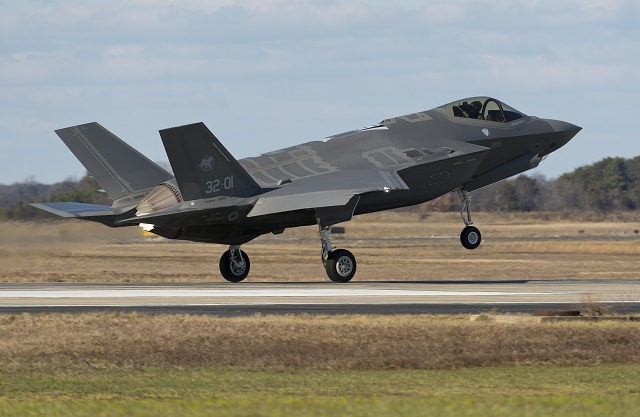 At the controls was Italian test pilot Maj Gianmarco, callsign “Ninja” – a former Panavia Tornado pilot who graduated from the multinational F-35A pilot school at Luke AFB in Arizona in November and has accumulated 80h of flight time on the type.

It was a moment of national pride for Italy when AL-1 touched down. After triumphantly unfurling his nation’s flag from the cockpit, Gianmarco was greeted by top generals from the Italian AF who travelled aboard the KC-767 to witness the occasion.

“The first aircraft to cross the pond is Italian, flown by an Italian, with Italian support,” Gianmarco told reporters at the base. “I’m really proud of it because we’re not following somebody in this. We’re on the very front line.

In June 2014, a contingent of US Marine Corps F-35Bs had been poised to make the transatlantic crossing to London to attend the Farnborough Airshow until an F-35A caught fire at Eglin AFB in Florida, temporarily grounding the fleet.

American and British F-35s are again preparing to cross the North Atlantic Ocean to attend the Royal International Air Tattoo (RIAT) and Farnborough Airshow in July, but it’s now too late to claim the monumental achievement. Those pilots will settle for second place but the first Lightning II flight from America to Europe.

Gianmarco was selected six months ago to ferry AL-1, and he admitted there have been many sleepless nights leading up to this moment. He says those marines who had been prepared to fly to Farnborough in 2014 helped him prepare for this first crossing. “I will give them all the help they need to do this. Semper fidelis!” he says.

The F-35A happened to be joined by an Italian Eurofighter Typhoon and its own KC-767 tanking companion, which were heading to a separate Red Flag exercise and split off to land at Pease Air National Guard Base in New Hampshire. Two Lockheed C-130s were flying underneath the group armed with inflatable life rafts in case of one of the pilots was forced to eject.

“We kept a tight formation and were able to refuel through clouds,” he says. “[The C-130s] guaranteed us 30min to 60min time before they drop you a big raft.”

Gianmarco says the group spent 5h of the 7h in poor meteorological conditions with headwinds of 120kt flying to St John’s, Canada before heading south along the East Coast through a warm front with moderate to severe turbulence, including during refuelling.

“The first [refuelling] was in cloud, the second was in cloud, the third was in turbulence — but we had 100% success,” he says. “There were no disconnections. The F-35 is really, really stable. The flight control system is very impressive because it’s really easy to stay back there and enjoy the ride.”

The aircraft, tail number MM7332 of the Italian AF’s 32nd Wing, refuelled a fourth time as a precaution before landing at NAS Patuxent River. 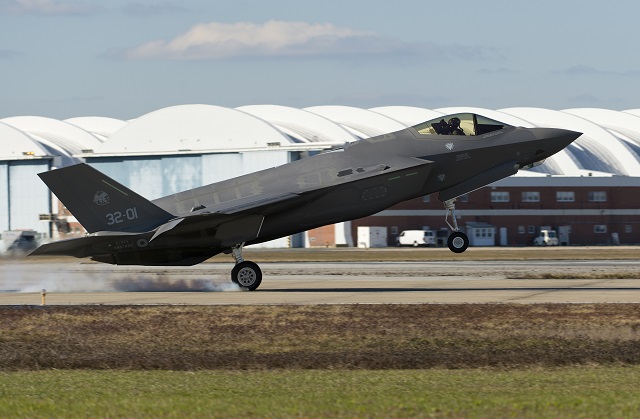 The first leg of the journey from the final assembly and checkout (FACO) facility at Cameri Air Base, Italy to Lajes Field happened on Tuesday and involved three in-flight refuellings. Poor weather prevented the second planned hop on Wednesday and again on Thursday.

Gianmarco says AL-1 is a more mature model than the aircraft he flew at Luke AFB, and he had complete confidence in the machine prior to making the crossing despite it being the first production model of a completely new assembly line.

“We had the chance to fly for 15h with the KC-767 before crossing the pond. In 6h for the first flight and 7h for the second one – we had no issues, and I mean zero,” Gianmarco says. “This is the first aircraft assembled outside of the US. We have 11,000 young workers at the FACO working as a team for this result, together with the operational wings and the air force to reach this successful achievement."

AL-1 will remain at NAS Patuxent River for two to three months of electromagnetic environmental effects (E3) testing before continuing on to Luke AFB to join the multinational training team that includes American, Australian and Dutch aircraft and pilots, plus teams from foreign military sales customers Japan and Israel. 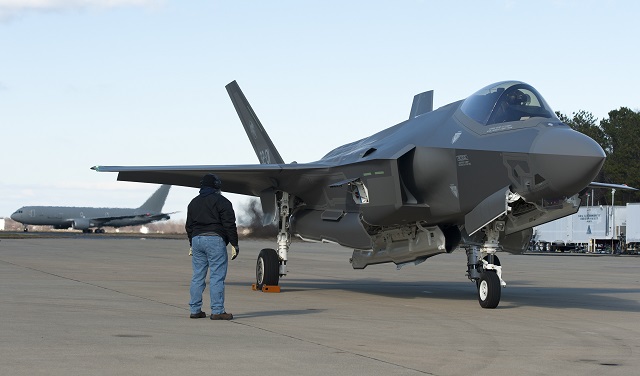 AL-1 as the first sample of a new production lot will be placed inside an anechoic chamber where engineers of US Naval Air Systems Command will subject the aircraft to every possible electromagnetic waveform that it might encounter in flight and in war.

“We define what RF environment this plane will operate in and will subject the plane to all those electromagnetic environments,” says E3 site director Kurt Sebacher. “We want to make sure when this plane flies by a SPY-1 radar or an air search radar that we do not have anomalies.”

Eventually, five Italian aircraft will transit to Luke, where they will be shared among pilots of the F-35 partner training programme. The sixth example will become the first operational aircraft of the 32nd Wing.

The Cameri plant is owned by the Italian government but operated by Alenia Aermacchi of Finmeccanica. Assembly of the lead example began in July 2013 and AL-1 first flew in September 2015.

The line will deliver aircraft for the Italian and Royal Netherlands air forces. Italy could procure as many as 60 F-35As and 30 F-35Bs depending on funding and the local political environment.