Just months after being rejected by South Korea and weeks after first flight, Boeing’s KC-46A has been selected by Japan to supplement the nation’s KC-767 tanker fleet.

The announcement came from Japanese defence minister Gen Nakatani on Friday, and constitutes a significant win for Boeing after a troubled start to the next-generation tanker development programme with the US Air Force.

The Pegasus tanker can almost see the end of its development phase, after achieving first flight 25 September from Paine Field in Washington, following a roughly nine-month delay.

According to Boeing, KC-46 is particularly attractive to Japan as it will be capable of refuelling the Japan Air Self-Defense Force’s planned fleet of Bell-Boeing MV-22 Osprey helicopters.

Japan intends to procure three tankers for fielding in the 2020 time frame, at a cost of more ¥20.8 billion – about $173 million per tanker.

“We look forward to working alongside the US government to help Japan expand its aerial refuelling capabilities with Boeing’s next-generation KC-46 tanker,” Boeing says in a statement. “We appreciate the confidence the Japan Ministry of Defense has shown in Boeing as we honour our commitments in country and continue our enduring partnership with Japan, which has been going strong for more than 60 years.

“Japanese industry plays a vital role in Boeing’s commercial and military programs and we hope to increase our presence in Japan.” 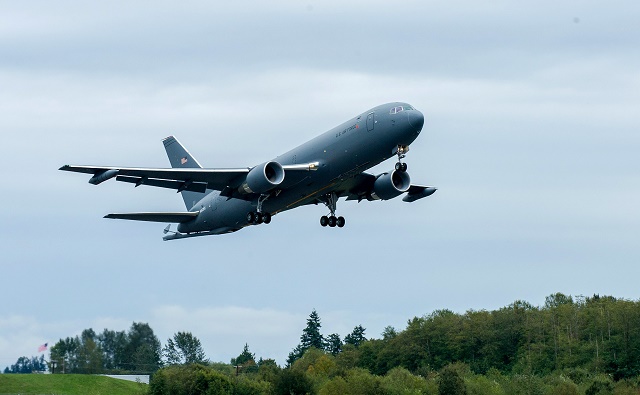 The decision to choose US equipment over the Airbus A330 Multi-Role Tanker Transport (MRTT) strengthens US-Japan ties and naturally allows for common operations and training, according to the MOD.

Airbus immediately declined to participate when Japan issued its tanker request for proposals in September, saying the notice was clearly intended for the Boeing KC-46.

“It would be an inappropriate use of shareholders' funds and company resources to bid on this contract and accordingly the company will not be competing,” Airbus said at the time.

Japan has funding for the tanker acquisition in its fiscal 2016 budget, and Boeing expects to receive a contract next year, so long as things proceed smoothly.

Boeing is building four 767-2C-based tankers in support of the USAF development effort and a low-rate production decision is planned for 2016. Despite delays and cost overruns, Boeing still aims to deliver 18 operational aircraft to the air force by August 2017.