The head of the multinational F-35 programme Lt Gen Christopher Bogdan is playing down the US Air Force’s decision to reduce annual procurement of the F-35A Lightning IIs to 48 per year, with the planned ramp-up to 60 units deferred from fiscal 2018 to 2021.

According to the service’s fiscal year 2017 budget submission, 45 fewer F-35As will be sought over the next five years. That’s 36 fewer Lightning II between 2017 and 2021 when adjusting for increased F-35B and F-35C purchases by the US government.

By Bogdan’s tally, the air force’s adjustments won’t impact the overall unit price by more than 1%. The programme office counts 873 American and international F-35 orders from 2016 to 2021, down 20 aircraft on last year’s plan because of the air force shift.

That amount includes Canada, which has promised to withdraw from the F-35 programme and launch a new competition to replace its CF-18s. American jets account for 54% of the total.

“We have all kinds of puts and takes with our eight partners and three [foreign military sales] customers, both in 2017 and in the future,” he says. “Relative to the cost of the airplane and FMS commitment, it’s a non-news event.”

Others aren’t so sure. Gen Larry Spencer, who retired in October as air force vice chief of staff, says this trend is reminiscent of the budgetary death spiral that helped prematurely end the Lockheed F-22 and Northrop Grumman B-2 procurements. He’s also concerned about delaying modernisation as Russia and China field advanced new weapon systems.

“I remember when the F-22 decision was made, the rationale was that we had the F-35 coming,” Spencer tells Flightglobal. “OK, well here we are and we’re starting to slip it. 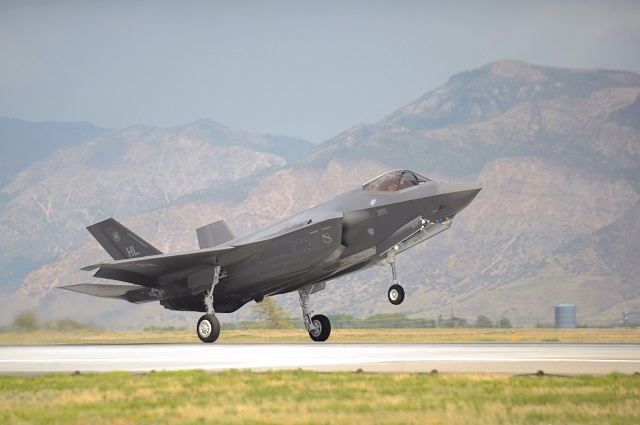 The air force still wants 1,763 jets, but says the deferments pay for “capacity and readiness for today’s fight”.

“There’s no question for the air force about that 1,763 [aircraft requirement], but I just get nervous when we start slipping it," Spencer adds. "I just hope this is not the beginning of a slope that will continue.

Aerospace analyst and former air force pilot Wayne Plucker of Frost & Sullivan says the F-35 hasn’t quite “caught the maturity curve” yet with approximately 20% of developmental testing remaining, and the deferral of higher production rates to 2021 will save costly modifications later.

“There are enough individual problems out there that are interrelated and significant enough that a slowdown in procurement such that you don’t have to go back and fix a boat-load of aircraft is probably in the overall best interest [of the air force]. I think that’s a reflection of those issues because they’re not really solved issues. There’s some band-aids but they’re not long-term fixes.”

Bogdan says the number of technical problems that must be rectified stands at 419 deficiencies, which is “not that many” compared to two or three years ago. The programme office’s largest concern is the F-35’s networked logistics system called Autonomic Logistics Information System, or ALIS, followed by mission system software issues related to the radar, sensors and sensor fusion algorithms.