K-Max and SARA team up for unmanned firefighting demo

Four systems participated in the 8 November exercise in at Griffiss International Airport in Rome, New York, including the K-Max, SARA, Lockheed's Indago quadrotor and the hand-launched Desert Hawk 3.1.

The Indago, a 2.26kg (5lb) quadcopter, located the fires and sent the positions to the K-MAX, which picked up water and delivered retardant, Jon McMillen, business development lead for K-Max, told reporters Tuesday.

The Desert Hawk used its infrared and electro-optical sensors to locate a lost person, then relayed those coordinates to K-Max. The fly-by-wire-enabled S-76 SARA, equipped with several LIDAR and camera sensors, received the coordinates from the K-MAX and picked up the survivor.

It took less than a week to integrate communications between K-Max and SARA, according to Lockheed.

During the November test, SARA operated with three LIDAR sensors and four different cameras, says Igor Cherepinsky, director of autonomy programmes at Lockheed. The helicopter also has radar on board that paints a full picture with a combination of sensor processing and a priori data to compensate during a smoky or dusty mission. Several electro-optical sensors complemented one shortwave infrared sensor on the aircraft for the demo, though that mix of sensors changes, he adds.

“As we experiment, given the name this is a research aircraft, we actually change some sensor complements fairly frequently,” Cherepinsky says. “We have several layouts because it’s getting us close to what we would eventually field in a commercial or military system.” 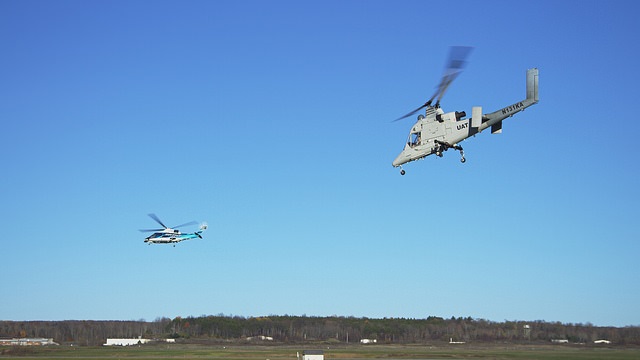 Lockheed would not reveal those combinations of sensors, but says SARA’s software is set up to process multiple suites.

“Radars play prominently as well,” Cherepinsky says. “They tend to be heavier and more expensive so we’ll use those in the setting it requires.”

Although Lockheed and Sikorsky have a roadmap of military demonstration planned, the recent experiment with fire suppression and search and rescue targets the civil sector. But those markets face more regulations than the military, McMillen says.