Initial operational test and evaluation on the Boeing KC-46A tanker will begin in January 2018 at the earliest, US Air Force officials tell FlightGlobal.

In a 10 February interview at Wright-Patterson Air Force Base, Ohio, KC-46 programme manager Col. John Newberry told FlightGlobalthat testing will begin pending the results of a US Air Force IOT&E readiness review in the fall of 2017.

Last year, the Pentagon’s top weapons tester estimated a May 2017 start for IOT&E and an April 2016 Milestone C date. But after Boeing discovered higher than expected axial loads on the refueling boom last May, the programme was forced to rebaseline its schedule. When Milestone C shifted from its expected April 2016 date to August, it initiated a domino effect that pushed other programme events, such as IOT&E, further out.

The air force negotiated the timeline for the updated schedule within the last month, Brig Gen Duke Richardson, programme executive officer for the service’s tanker fleet, tells FlightGlobal. Delivery of the initial 18 aircraft is projected for February of 2018, rather than the August 2017 date announced last May. The spare engines and Cobham-made wing aerial refueling pods (WARPs) will be delivered in October 2018 as expected. 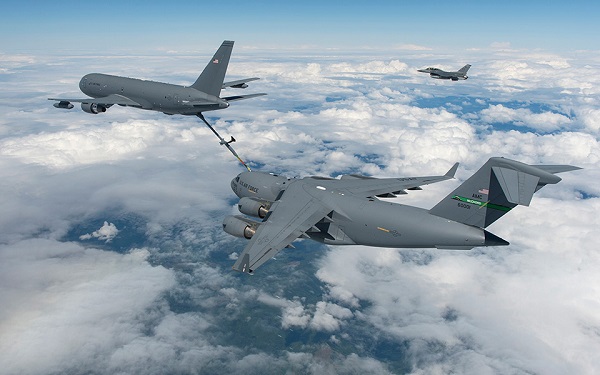 In a 2016 report, Director of Operational Test and Evaluation Michael Gilmore warned that Boeing’s past performance would not bode well for a timely schedule. Based on the tanker replacement programme’s history, its current schedule is “aggressive and unlikely to be executed as planned,” he wrote.

But that report was released before the air force reached an agreement with Boeing on the new schedule, Richardson says.

“That will help alleviate some of the pressure the DOT&E report talks about,” he says. “We’re still worried there’s pressure there, we’re going to monitor it closely.”

In addition to USAF requirements, Boeing must unlock test points required by the Federal Aviation Administration, he says. Overall, Richardson is encouraged by the programme’s progress, noting Boeing has completed 54% of all test points and is reporting on schedule.

Gilmore’s report also noted that before IOT&E closes, program managers should correct at least some of the cybersecurity vulnerability discovered during a second operational test. Richardson clarified that the assessment was completed in a systems integration laboratory and the USAF believes the findings are related to the laboratory environment. The service plans to test for cyber vulnerabilities again on an actual aircraft before IOT&E, he says.

“We don’t think they’re our cyber vulnerabilities,” he says. “I would hesitate to use the word correction because I don’t think there are any actual problems. It (happened) in the lab environment, which isn’t a complete match to the airplane.”