Lockheed Martin has tested the structural integrity of an F-16C Block 50 over 27,700 equivalent flight hours as it seeks to life-extend the aircraft from 8,000h to 12,000h.

The company says full-scale stress and fatigue testing at the company’s durability test facility in Fort Worth, Texas, concluded in July after reaching 27,713h over 32 cycles and the aircraft is now being pulled apart and inspected for structural aberrations.

The extensive testing allows Lockheed engineers to develop a roadmap for keeping Block 40 to Block 52 versions operational beyond their original design life of 8,000h. 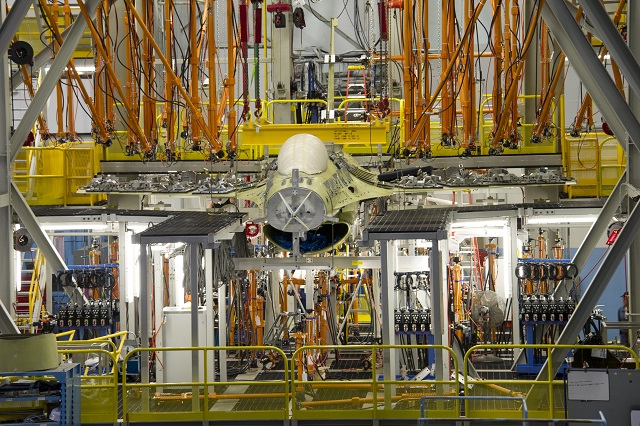 An F-16C Block 50 aircraft has been undergoing stress testing over two years at Lockheed's durability test facility in Fort Worth, Texas.

The US Air Force plans on life-extending approximately 300 F-16C/Ds after cancelling a more comprehensive modernisation package, since the Lockheed F-35 will come online far later than originally expected. Lockheed is also looking to the structural needs of 27 other F-16 operators, particularly Taiwan and South Korea.

The life-extension preparations come as Lockheed flight tests its F-16V configuration for the first time at Fort Worth, Texas. The type features Northrop Grumman’s APG-83 scalable agile-beam radar (SABR) and is being offered as a new-build or upgrade, preferably as an integrated upgrade and life-extension package.

Lockheed continues to produce F-16s at very low rate and recently delivered its final tranche of Egyptian F-16 Block 52s. Four aircraft arrived at Cairo West AFB on 29 October and have been immediately integrated into the force. The four add to the eight that were delivered in June after the Obama Administration lifted its ban on deliveries of military equipment to Cairo.

Iraq continues to receive aircraft and Lockheed expects to receive further orders to sustain the production line beyond 2017.