The device is on display for the first time at the MAKS air show in Moscow, and the company’s chief designer of technical training systems tells Flightglobal that the simulator replicates the full range of combat scenarios made possible via the BM upgrade. This includes making co-ordinated attacks with up to four other MiG-31s using the latest weapons and improved Zaslon-M radar. 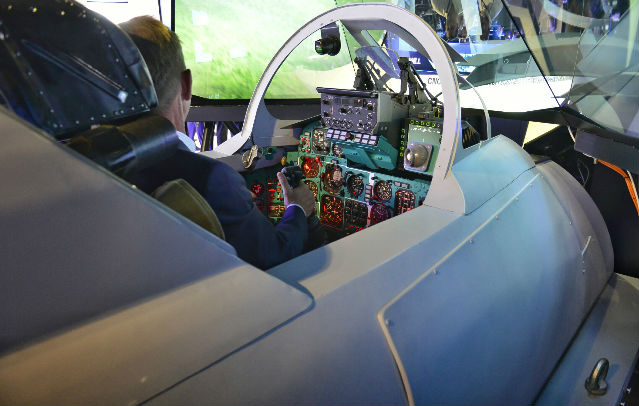 He says four or five simulators have been delivered so far under a contract signed with the Russian defence ministry in 2011.

The most noticeable feature is its mounted, panoramic high-resolution display, as opposed to a traditional projection. However, the most significant changes are new avionics panels in the aft cockpit and software that replicate the type’s new combat capabilities and weapon effects.

“It’s possible to recreate all flight stages and to simulate any fails, for example, crash or engine fire – more than 300 different fails,” says Ivanenka.

Russia and Kazakhstan are the only known operators of the B-model MiG-31, although Syria has reportedly received as many as six amid Western-led airstrikes against militant groups in the country’s northern region.

The Russian air force operates more than 130 MiG-31s, while Kazakhstan inherited approximately 30 aircraft in the break-up of the Soviet Union.

Russia has issued contracts for 100 upgrades as part of a wider force modernisation programme. These are expected to be installed across the entire MiG-31 fleet, with officials saying that structural improvements will keep the 1980s-era aircraft viable out to 2030.

Ivanenka says the Russian and Kazakh MiG-31 markets are “just the two I know,” although Kazakhstan has not yet announced any plans to upgrade its fleet.