Malaysia Airlines flight MH17 was shot down over eastern Ukraine by a Russian-built surface-to-air missile, investigators have formally concluded.

The Boeing 777-200ER – transporting 298 occupants from Amsterdam to Kuala Lumpur – was destroyed on 17 July last year as it passed over hostile territory.

In its final report into the event the Dutch Safety Board states that the crash was caused by the “detonation” of a warhead of the type 9N314M, from a Buk missile system, launched from eastern Ukraine.

“None of the parties involved recognised the risk posed to overflying civil aircraft by the armed conflict,” says the inquiry.

It states that Ukrainian authorities had “sufficient reason” to close the affected region of airspace before the date of the 777’s destruction.

The missile was launched from a 320km² region of Ukraine – determined by simulations – and detonated above and left of the 777’s cockpit. 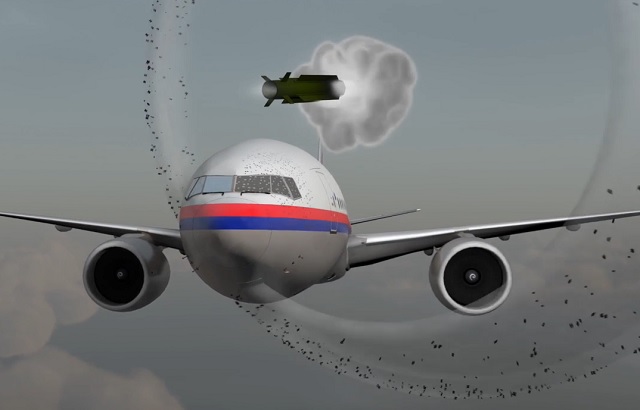 As a result of the explosion the aircraft was penetrated by “hundreds” of high-energy objects from the warhead, says the inquiry, killing the three crew members “immediately”.

The aircraft subsequently broke up with the loss of all 298 on board.

Investigators state that “no other scenario” than the Buk warhead explosion explains the combination of evidence.

This includes identification of the weapon system based on fragments in the 777’s wreckage, the crew, the damage pattern to the jet, and the manner of the in-flight break-up.

Cockpit-voice recordings detected a “sound peak” during the final milliseconds before the destruction of the aircraft, says the inquiry, while traces of paint on missile fragments match those of parts of a missile recovered from the region.

“Other potential causes, such as an explosion inside the aeroplane or an air-to-air missile, have been investigated and excluded,” says the inquiry, which adds that additional forensic investigation is needed to narrow down the launch site.

Russian defence firm Almaz-Antey, which builds the Buk missile system, says it is carrying out “full-scale” experiments to study the destruction of the 777.