German oceanographic analysis indicates that the aircraft component washed up on Reunion in July probably originated from the eastern equatorial Indian Ocean.

The analysis lends weight to the suspicion that the flaperon component – a section of the wing’s flight-control surface – was part of the missing Malaysia Airlines Boeing 777 which disappeared in March last year.

But the Geomar Helmholtz Centre for Ocean Research, based in Kiel, cautions that there are “very large” uncertainties which would work against attempts to narrow the area further.

Oceanographers from Geomar have attempted to model the drift of the component using computers supported by observational data. 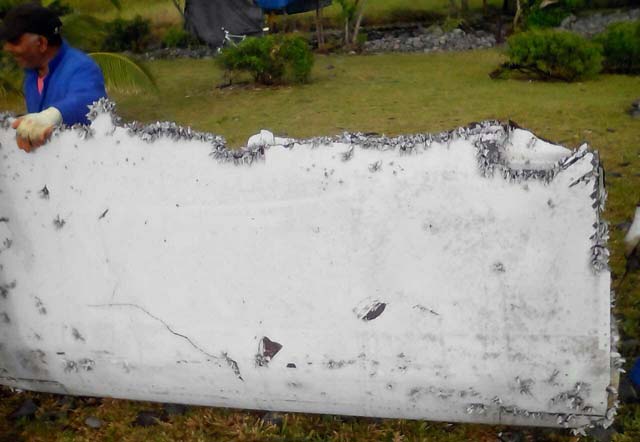 This modelling has involved reverse-tracking nearly 2 million virtual particles across the 16 months between flight MH370’s disappearance and the discovery of the flaperon.

Possible origination points for the flaperon, calculated by the model, extend from the western coast of Sumatra and Java.

“The results show that the crash site could be found further north than previously thought,” the organisation states.

All the virtual particles were traced to an area equatorward of latitude 30°S. “Our findings therefore show that the ongoing search southwest of Australia might be too far south,” says Geomar’s Jonathan Durgadoo.

But the organisation adds that, while the model is consistent with previous communications analysis which put MH370’s location in the eastern Indian Ocean, the scale of the uncertainty makes localising the site “difficult”.

Geomar states that additional MH370 debris would be needed to generate more precise information. It adds that it intends to explore a possible refinement of the analysis by examining wind and wave data.