Data from a failed phone call to the Boeing 777-200ER that went missing while operating flight MH370 on 8 March is pointing towards the aircraft turning south earlier than thought.

Speaking at a press conference following talks with his Malaysian and Chinese counterparts on 28 August, Australia’s infrastructure minister Warren Truss revealed that after the 777 disappeared from radar, ground staff from the airline tried to call the aircraft’s satellite phone.

“Now, that was unsuccessful, but the detailed research that's being done now has been able to identify, or trace, that phone call and help to position the aircraft and the direction it was travelling,” he says.

Truss adds that the data from that phone call “has suggested to us that the aircraft may have turned south a little earlier than we had previously expected.”

Nevertheless, Truss adds that the data still points towards the aircraft being located along the ‘seventh arc’, which is being mapped by survey vessels and will be the starting point for the renewed underwater search. 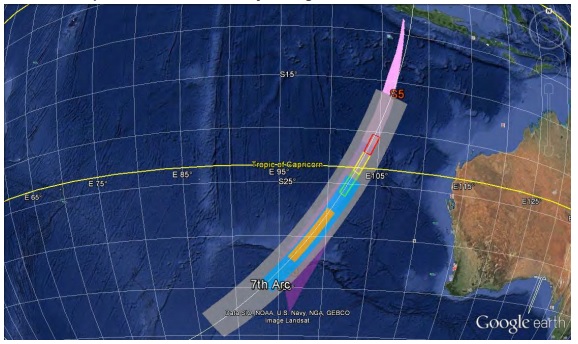 In the same press conference, Malaysia’s transport minister Liow Tiong Lai confirmed that it will share the costs of the underwater search with Australia. Truss has estimated that cost at A$52 million, based on the 60,000km2 area that the Australian government has contracted Fugro Survey to search.

The underwater search is set to commence in around three weeks’ time when Malaysian contracted vessel Go Phoenix arrives in the search area. It will be joined by Fugro Equator and Fugro Discovery, and together they will use sensitive sonar and video equipment to try to locate the missing airliner.

It is expected that the search of the high priority area will take up to 12 months to complete.