The designers of an unorthodox aircraft with twin passenger pods sitting either side of the central fuselage are seeking the backing of an established aerospace name to bring their single-engined pusher-prop to market.

Charlee Smith, founder of Templeton, California-based Micronautix says he has already approached a number of original equipment manufacturers, including General Atomics Aeronautical Systems, Extra Aircraft and Aurora Flight Sciences, about the Triton concept but nothing has materialised. “They are happy to assist with the programme as long as I come up with $60-plus million to help finance it,” he says.

However, Smith is undeterred. “I would be willing to hand over the design rights to the most suitable company, just to see the Triton become a reality,” he says.

Smith, who is also the vice-president of adhesive manufacturer BSI, admits developing a new aircraft poses significant challenges – not least the huge sums involved in bringing the design to market. “Aviation history is filled with failed concepts that designers have attempted to bring to market by themselves,” says Smith. “I feel the positive impact the Triton can have on aviation is more important than my own personal gain.”

The Triton’s ­design features a centre pod which houses the pilot and a ­single passenger. This is flanked by two “cabins”, each holding two passengers.

“The Triton will provide panoramic views and luxury car-like accommodation in a fighter jet-like environment that sitting in the back seat of today’s average GA aircraft just can’t provide,” says Smith. 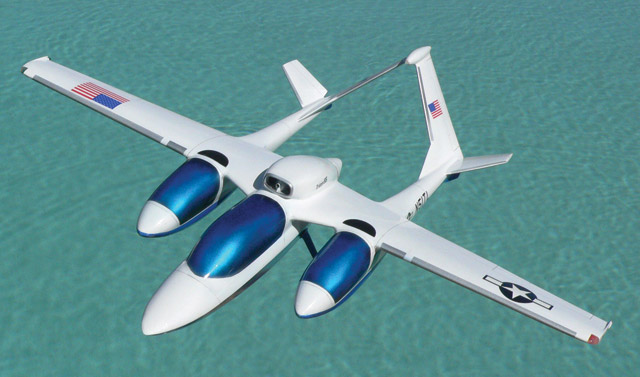 The aircraft will also be equipped with a ballistic recovery system.

Micronautix plans to offer a number of versions of the type, including an amphibian and an electric hybrid “which will ­provide up to 20min of near silent flight over noise-sensitive areas”, such an national parks, says Smith.

The Triton is being targeted at owner-flyers, air taxi and air tour operators. Micronautix plans to unveil a one-sixth and one-tenth scale model of the Triton later this year.