The US Department of Defense’s (DoD) Office of Operational Test and Evaluation plans to test fly its Fifth-Generation Aerial Target (5GAT) prototype for the first time in October at Dugway Proving Ground in Utah. 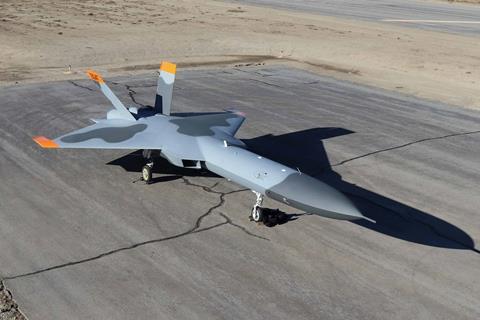 “The single prototype executed 24 taxi test events (15 low-speed and nine high-speed) in just six days, with no interruptions or major problems,” says the Pentagon. The aircraft was scheduled to make its initial flight during the first quarter of 2020, but was delayed due to coronavirus travel restrictions.

The 5GAT is designed to mimic the radar cross-section of adversaries’ combat aircraft for target practice. The DoD has not said specifically which aircraft it is supposed to resemble, but stealth fighters, such as Russia’s Sukhoi Su-57 and China’s Chengdu J-20, are likely candidates.

“The low-cost drone is designed to enable air-to-air and surface-to-air platform and weapons test and evaluation, pilot and ground-force training, and the development of tactics, techniques and procedures against a fifth-generation threat,” says the DoD.

The company has also marketed the aircraft as a possible attritable UAV, a drone cheap enough to be produced and lost in combat in large numbers without breaking the bank. The Pentagon is exploring the idea of using large numbers of attritable UAVs to overwhelm an adversary’s defences.

Initial flight test objectives for the 5GAT are planned to include demonstrating flight characteristics, various subsystems’ performance and the aircraft’s auto-take-off and auto-landing functionality, says the DoD. Follow-on flight tests should gradually expand the UAV’s flight envelope in altitude, speed and greater g-force loading. Sierra Technical services has said that the aircraft should be able to manoeuvre at +7.5g and -2g for short periods.