The two companies are working together under a contract granted through the US Army Reconfigurable Communications for Small Unmanned Systems initiative, AeroVironment said on 15 October. Viasat is the prime contractor for the award. 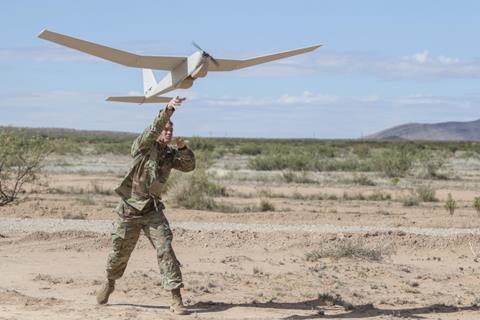 Puma AE being launched by hand

The US Army, which is one of the main operators of AeroVironment’s tactical drones, is pushing to network its various UAVs, aircraft, vehicles and soldiers so that battlefield information can be quickly shared. However, existing tactical communications systems have already been shown to be vulnerable to electronic warfare, including jamming and spoofing. Transmissions have also been used in conflict zones, for example in eastern Ukraine, to geolocate targets for attacks.

The Puma AE is a small fixed-wing UAV used for short-range intelligence, surveillance and reconnaissance. Depending on the ground antennae used, the drone can fly out to 32.3nm (60km) and can carry electro-optical and infrared cameras within a gimbal.