Looking for a new way to resupply ground troops, the US Air Force Research Laboratory (AFRL) has ordered 15 cargo glider drones from Silent Arrow, a company of Yates Electrospace. 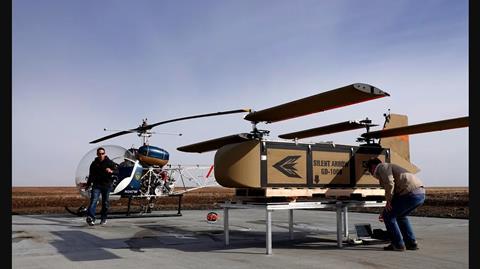 The smaller Precision Guided Bundle UAV will be able to be launched from aircraft side doors and cargo ramps. Aircraft capable of deploying the drones will include those as small as Cessna Caravan turboprops and as large as Boeing C-17 strategic airlifters, the company says.

The autonomous unmanned air vehicles (UAVs) will be built at the company’s Irvine site, then shipped north for operational evaluations in 2022 at Pendleton UAS Test Range in Oregon, Silent Arrow adds.

The Silent Arrow line of cargo gliders have spring-loaded wings that fold for storage and deploy for flight. The type is advertised as being cheaper than the US Army’s Joint Precision Airdrop System, a GPS-guided parachute system used for delivering cargo.

The un-powered Precision Guided Bundle has a 34.8nm (64.4km) glide range and is “deployable from high altitudes and airspeeds”, says Silent Arrow. It is about 1m (3.3ft) long and has 159kg (350lb) of cargo payload capacity. By comparison, the larger Silent Arrow GD-2000 can carry 740kg of cargo.

Silent Arrow says Precision Guided Bundles will also have swarming abilities, likely meaning the UAVs will be able to share sensor data and work together to find landing zones.