Startup Anduril Industries has unveiled its Ghost 4, the latest variant of its autonomous tactical drones.

The company promises that the unmanned air vehicle (UAV) is more rugged, packable and longer-flying than its predecessor. Its on-board computer, which has 32 teraops of processing power, allows the drone to use artificial intelligence programs to make decisions and identify targets autonomously. 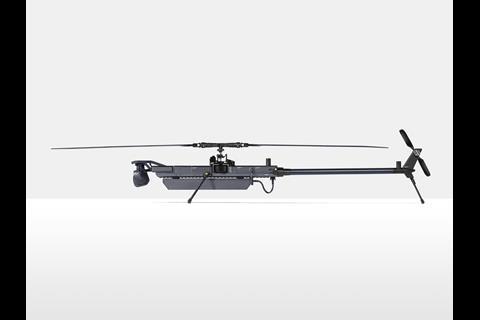 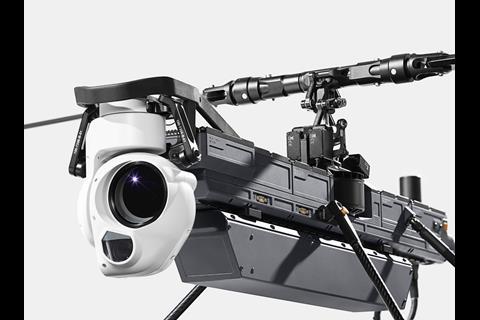 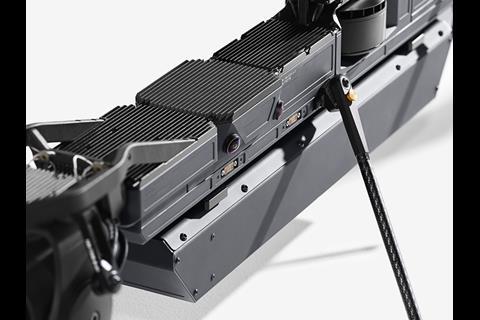 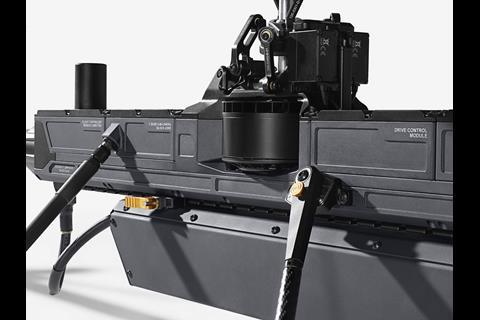 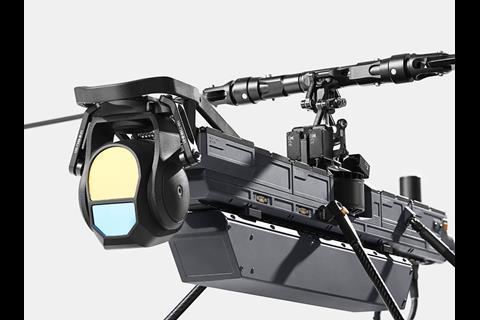 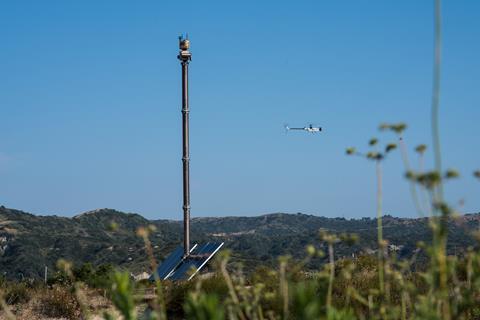 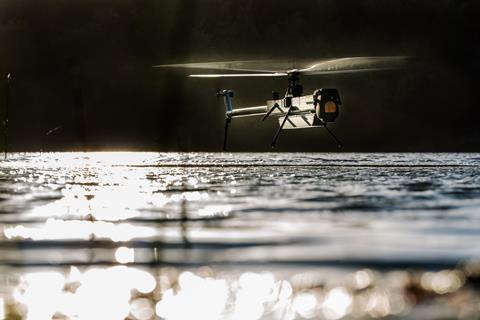 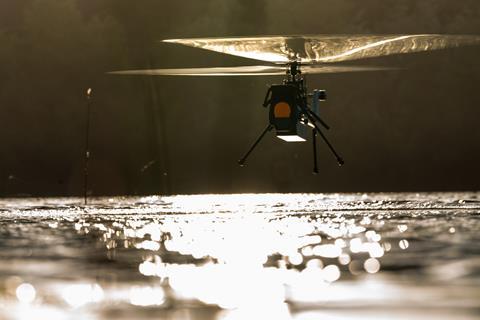 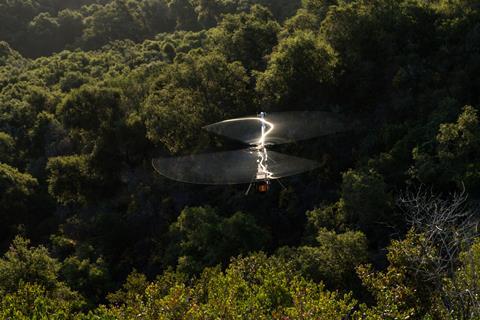 The drone’s unveiling comes after Anduril raised a $200 million round of capital in July to further develop its suite of products. The company said that funding round raised its valuation to $1.9 billion. Palmer Luckey, Anduril’s founder, previously established virtual reality headset maker Oculus, which sold to Facebook for $2 billion in 2014.

Luckey says the Ghost 4 has been ruggedised to make it more suitable for military users. It has new shock, heat, cold and water-proof qualities, he notes.

“It can survive basically any environment,” Luckey says. “You could submerge it in up to a meter of water. You can salt spray this thing all day long and not have any problem.”

The UAV also breaks down to fit inside a small backpack. “The Ghost 4, you can pull it out of the bag, pop it together with literally no tool. Every single part of it is a quick release or a quick lock mechanism, including the rotors,” Luckey says. “The rotor blades themselves just have a little clip mechanism [for attaching] into the head. The same goes for the landing gear and the tail.”

The Ghost 4’s rotor system has also been overhauled.

“Ghost 3 had a transmission and a gearbox, like a drive. It had different blades, different heads,” says Luckey. “We’ve made all of the servo motors much quieter. We’ve made the blades themselves a much better aerodynamic design. We’ve also gone to a direct drive motor, so we don’t have any transmission; we don’t have any gear wind. That increases efficiency, but it also means we’re a lot quieter so you can hover this thing 100 yards away and you can’t hear it.”

The battery-powered UAV also has a more than 100min flight endurance, he adds. The Ghost 4 has a cruise speed of about 52kt (96km/h) and can fully recharge in about 35min. That means that the UAV could cover about 100 miles (161km) of ground on a single charge, notes Luckey. Because the drone’s recharge speed is faster than its discharge time, two UAVs – one flying and one recharging – could be paired to continuously monitor a 50 mile out-and-back stretch, he adds.

The drone is part of a group of surveillance systems that Anduril sells, including the company’s Sentry Tower sensor pole, Anvil interceptor drone and Lattice artificial intelligence software. The different surveillance tools can autonomously work together to spot and track targets. The sensor platforms can also be sold separately and work independent of each other.

The company counts the US Department of Defense and the UK Ministry of Defence as customers of its Ghost 3. Anduril says its existing customers had significant input in the design of Ghost 4 and have expressed interest in upgrading.

Anduril’s family of products are designed for base defence, protecting critical infrastructure, counter-drone operations and border patrol, it says. For example, the company envisions the Ghost 4 drones being used in teams, perhaps in coordination with the Sentry Towers. For instance, the sensors on the pole, such as thermal or optical cameras, would automatically detect and line up targets for the UAV to investigate further. Once on the scene, the Ghost 4 UAVs are designed with enough computer power to make sense of the situation and then transmit back conclusions as well as data to a human controller.

“We have a lot of on-board processing doing complex computer vision and sensor fusion tasks,” says Luckey. “The idea here is you can have one guy managing a fleet of dozens of Ghosts, and having all that data come back into one single common operating picture.”

The UAV relies on computer chips from Nvidia that were designed for the self-driving car market. Each of these costs “low hundreds of dollars”, Luckey says.

“If you’re sending your video back over a data link you’re actually limited by the rate of that link – so, the resolution, the frame rate and the compression,” says Luckey. For example, a drone’s ability to automatically search and discover a concealed surface-to-air missile battery would be limited in its analysis by its ability to pass back data via its video link to an off-board computer, he says. An on-board computer avoids that problem.

Local computing power also allows for greater UAV autonomy, including the ability to run radio silent in some situations.

“Let’s say that I want to send five Ghosts out to a compound where there’s bad dudes,” says Luckey. “I want to orbit the compound, watch what they’re doing, and then as people leave, have each Ghost detect that they’re leaving, and have them peel off one at a time to follow them to wherever they’re going, and then report back home.”

The systems could be told to break radio silence and alert their human controllers when certain behaviour is observed. “That’s the type of flexibilities in the past that have been limited to human airframes,” says Luckey.

The ability to operate on a limited radio link or poor radio link could also enable “leave-behind operations”, he says.

“You can imagine taking one of these, leaving it behind with a partner [and] saying, ‘Hey, when we give you a phone call, take this out of the box and put it on your roof.’ And then, the US can log in from the United States, take this thing off, fly it, do a mission, fly it back home to the partner for us. They put it back in a box,” says Palmer. “That allows us to do all kinds of things without actually deploying US troops to that area to operate this thing.”

Luckey envisions the UAV being used for far less clandestine missions as well, such as automatically warning away trespassers with a spotlight and loudspeaker.

Such payloads can be swapped in and out in the field within a few minutes, Anduril says. The new UAV comes with five modular payload bays, each with data and power links. Those can accommodate a variety of different payloads, including new processors, sensors, loudspeakers, laser designators, electronic warfare modules, 3-D scanning modules and LIDAR, says Luckey.

The specifications for the payloads are open so that UAV customers or third party developers can add their equipment to the Ghost 4, he adds. The company says undisclosed third parties are developing communications and electronic warfare payloads for the drone.

Correction: Palmer Luckey is Anduril’s founder, but not its chief executive