There was one company US Army Brigadier General Walter Rugen wanted to “brag on” after the service’s recent Project Convergence exercises, a proving ground in the Arizona desert for futuristic war fighting concepts. That was start-up Area-I.

The small Georgia-based company has come out of the woodwork to become a key supplier for the US Army’s experimental war plans. In particular, it is developing so-called air-launched effects, small unmanned air vehicles (UAVs) that are launched from aircraft or other UAVs to perform scouting missions behind enemy lines. 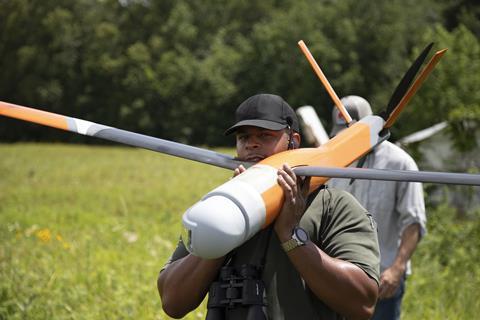 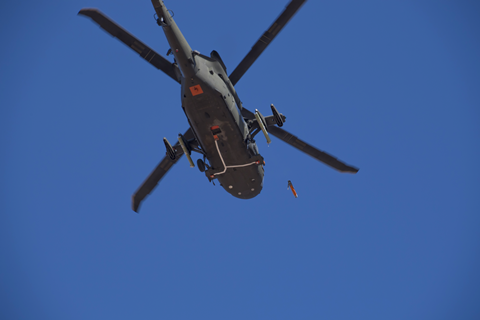 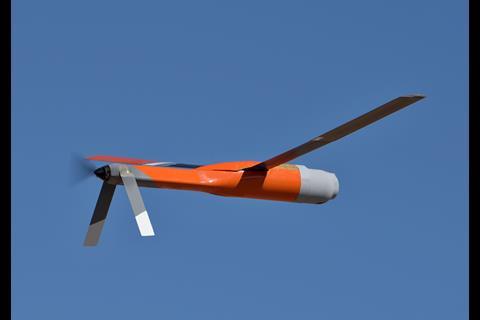 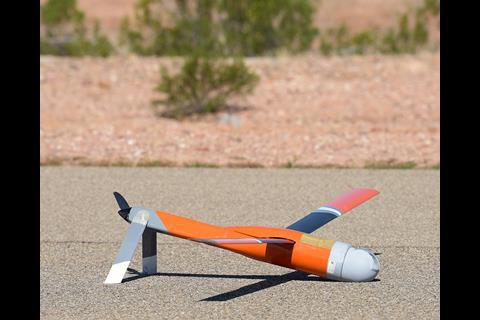 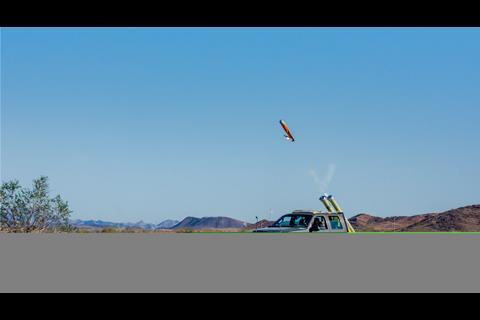 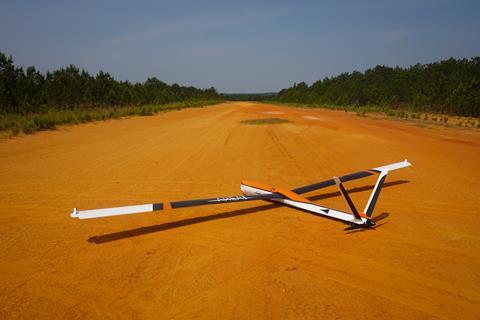 Altius-900 on the ground 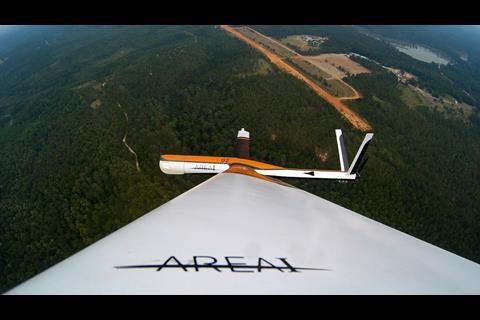 The service is leaning on these small drones to stay relevant in an era where sophisticated surface-to-air missiles threaten to shoot down its traditional way of fighting. Unable to safely approach enemy forces too closely with its attack and scout helicopters, the US Army wants to probe from a distance with air-launched effects and then lob long-range missiles at key targets.

Area-I’s Altius-600 has become a focal point of US Army exercises. It has been launched from a Sikorsky UH-60 Black Hawk and a General Atomics Aeronautical Systems MQ-1C Gray Eagle. The start-up, which was founded in 2009, has worked closely with the service over the past couple of years to pioneer the air-launched effects concept. It now boasts that it has air-launched its Altius-600 more than 40 times in the past six months and only lost two aircraft.

With recent successes under its belt, the company is expanding its ambitions. Area-I is developing an even larger air-launched effect, called the Altius-900. That UAV is capable of more than 15h of flight time and has a range of 540nm (1,000km). Efforts are also underway to repurpose the Altius-600 for launches into the eye of hurricanes as part of a National Oceanic and Atmospheric Administration (NOAA) mission to better understand the extreme weather.

Area-I’s UAVs are able to air launch into a variety of conditions – from helicopters to hurricanes – due to the firm’s longtime focus on refined engineering and aerodynamics, argues chief executive Nicholas Alley.

Alley says he noticed the finer points of aeronautical engineering were overlooked by the first generation of drone manufacturers while touring their facilities in 2006.

“I’d say, ‘Hey, where’s your aero guy?’” he recalls. “Inevitably, the story was ‘We had a guy who was pretty interested in RC airplanes and we use the spreadsheet we found online [to design our UAV].’”

“I don’t want to name any names, but these are big time UAVs that were turned into multi-, probably billion-dollar companies,” says Alley, adding that he saw an opportunity to increase the performance of UAVs.

That sort of thinking has influenced the design of the company’s Altius-600. In order for the UAV to have the slender, elongated wings needed to achieve up to 4h of flight endurance, while still fitting inside the US military’s Common Launch Tube, the company had to engineer the drone into “a flying, transforming robot”, says Alley.

That is, the Altius-600’s wings telescope outward from within themselves. By fitting the wing within itself and spring loading its expansion, the UAV has room for more batteries. Its wings also have much higher aspect ratios than other tube-launched UAVs, such as the AeroVironment Switchblade or Raytheon Coyote, claims Alley: those types use a dual set of shorter wings that fold.

The emphasis on aerodynamic efficiency has also resulted in the Altius-600 having a “very slippery airframe” with few protrusions, says Alley. And, the UAV’s pusher propeller is designed in-house.

“Most UAV manufacturers draw heavily from the RC hobbyist market when selecting propellers. This greatly limits the design space, especially when it comes to folding propellers that can be stowed in a tube,” says Alley. Instead, Area-I used “proprietary aerodynamic tools” to design the propellers to improve its performance, shrink its acoustic signature, and allow the propeller to be folded, he says.

But perhaps most importantly, Alley says Area-I has figured out a way to consistently achieve stable flight after the Altius-600 is ejected from its launch tube. That can be incredibly difficult when launching from a fast-moving aircraft such as a Lockheed Martin AC-130J Ghostrider gunship.

“You can imagine you’re sitting nice and happy in this little tube. And then all of a sudden, you get jetted out to the free stream. You could be going hundreds of knots,” says Alley. “Every launch is unique: tumbling, spinning, trying to stabilise the aircraft, ensure that it knows where it is, and where [or] how it’s oriented, and then allowing it to get on wing without exploding itself.”

This ability to stabilise the Altius-600 after it starts tumbling is the company’s secret sauce, he says, declining to explain how the UAV rights itself.

US AIR FORCE TO US ARMY

Area-I got to this point through a series of small business innovation research contracts issued through the US Air Force Research Laboratory, starting in 2011. Those initially funded development of the Altius-600 for deployment from the Air Force Special Operations Command’s (AFSOC) AC-130J. Alley declines to explain the missions the UAV flew, but prior press reports say the Altius-600 was flown below cloud level to find targets for the gunship.

More recently, the company has become involved with the US Army, pursuing the service’s vision for air-launched effects, a concept that was pioneered in coordination with the Combat Capabilities Development Command Aviation and Missile Center’s Technology Development Directorate – Aviation at Fort Eustice in Newport News, Virginia, says Alley.

During Project Convergence, the Altius-600 was launched from a UH-60 utility helicopter at as little as 100ft above ground level. The Black Hawk was serving as a surrogate Future Attack Reconnaissance Aircraft (FARA), the US Army’s next-generation armed scouting helicopter, intended to replace the retired Bell OH-6 Kiowa Warrior.

The service wants to prove that the small drone can launch from a scout helicopter that is flying so low that enemy radar cannot differentiate the rotorcraft from the ground or surrounding hills. Essentially, it is the Altius-600’s mission to go and hunt for targets while FARA hides in the radar shadows.

Indeed, the US Army has outlined several possible missions for air-launched effects, including intelligence, surveillance and reconnaissance (ISR), electronic warfare, decoy applications, communications relay work and loitering munition strikes. Of particular interest for ISR and strike missions are the Pantsir-S1, a Russian short-range air-defence system, as well as command and control centres.

In addition to its work with the US Army and AFSOC, Area-I has three other air-launched effects efforts: a NOAA variant of the Altius-600, the US Navy’s (USN’s) Altius-500 and the Altius-900.

The Altius-500 was designed to be stored and launch from A-size Sonobuoy Launch Canisters aboard the Boeing P-8A Poseidon maritime patrol aircraft. Because the P-8A does not have magnetic anomaly detection equipment to sense the presence of a submarine below the surface of the water the USN was considering using the Altius-500 to do the mission. Alley says that project is on hold while the service decides if it wants to proceed.

The company is also developing a variant of the Altius-600 to inject into hurricanes on behalf of NOAA. The company has demonstrated safe launches from the Lockheed WP-3D Orion and will likely start flights into hurricanes next year. The drone will carry a suite of weather and communication hardware, including temperature, pressure and humidity sensors, as well as downward-looking infrared sensors, a datalink with a 150nm range and a satellite modem.

NOAA plans to launch the Altius-600 into the eye of the hurricane and then it will transition through the wall of the storm. Area-I believes the UAV should be able to survive 3h to 4h in the hurricane, depending on turbulence.

“There are provisions in the Altius flight controller to recover from severe upsets (tumbling), but we’ve done extensive flight simulations utilising NOAA-provided wind models, and we’re confident that we should be able to stay upright,” says Alley.

Finally, Area-I is developing the Altius-900 for a mystery customer. Alley declines to name the client. “Wouldn’t you like to know,” he says.

Weighing 36.3kg (80lb), the Altius-900 is intended to be hung and dropped from 14in, 450kg-class bomb rack units, like those that are used by the US Air Force’s General Atomics MQ-9A Reaper. The larger UAV has 6.1m (20ft)-long telescoping wings. It can be dropped out of the back of a cargo aircraft, in addition to being deployed from a bomb rack, says Alley. Instead of an electric motor, it gets its range from a hybrid-electric engine that runs on heavy fuel. The aircraft is still at a relatively low technology readiness level, and Area-I is planning additional flight tests soon.

Alley declines to say what the Altius-900’s application is, but says its payload can include electro-optical and infrared sensors. “I think you can kind of deduce from the endurances and payloads that are presented online, there’s quite a bit of goodness associated with that,” he says.

Update: The article was changed on 4 November to include the full name of the Combat Capabilities Development Command Aviation and Missile Center’s Technology Development Directorate – Aviation.