The US Defense Advanced Research Projects Agency (DARPA) came within inches of snatching several X-61A Gremlins unmanned air vehicles (UAVs) out of the sky using an arm extended from the cargo bay of a Lockheed Martin C-130. However, the aerial captures were aborted because of too much movement between the docking mechanism and the drones.

The research agency attempted airborne retrieval of three different Gremlins. As part of flight tests that started on 28 October, the UAVs were flown for more than 2h each, validating autonomous formation flying positions and safety features prior to the attempted recoveries with the C-130’s mechanical arm and “docking bullet”. 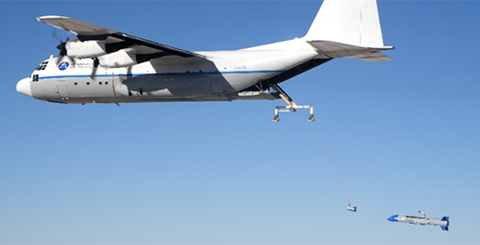 “Nine attempts were made at mechanical engagement of the [UAVs] to the docking bullet extended from a C-130 aircraft, but relative movement was more dynamic than expected and each [UAV] ultimately, safely parachuted to the ground,” DARPA said on 10 December.

“All of our systems looked good during the ground tests, but the flight test is where you truly find how things work,” says Scott Wierzbanowski, programme manager for Gremlins in DARPA’s Tactical Technology Office. “We came within inches of connection on each attempt but, ultimately, it just wasn’t close enough to engage the recovery system.”

Using data collected about aerodynamic interactions between the docking bullet and the UAV, DARPA plans more analysis, model and design updates, as well as additional test flights and retrieval attempts in the spring of 2021.

“We were so close this time that I am confident that multiple airborne recoveries will be made in the next deployment,” says Wierzbanowski. “However, as with all flight testing, there are always real world uncertainties and challenges that have to be overcome.”

The Gremlins programme aims to demonstrate the air launch and air recovery of four UAVs within 30min. Once back on the ground, the UAVs should be able to be readied for another mission within 24h.

DARPA is exploring the Gremlins concept as a way to launch reconnaissance UAVs from the edge of enemy territory. The ability to air launch and air recover means the drones would not have to carry as much fuel, as the mothership C-130 would carry them for part of the journey. Recoverability also means the UAVs could be reused, which would save costs.