The company says the test was intended to show that its intelligence, surveillance and reconnaissance (ISR) unmanned aircraft could be teamed with manned aircraft. 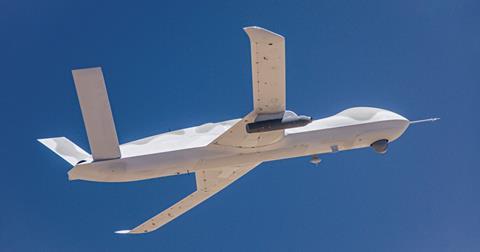 “[General Atomics] is committed to developing persistent and affordable solutions to meet the challenges of air domain awareness and defensive counter-air against near-peer threats,” says Chris Pehrson, General Atomics’ vice-president of special programmes. “The success of this Avenger and Legion Pod demonstration represents an important step toward more sophisticated autonomous missions for unmanned aircraft and [manned-unmanned teaming] in a complex battlespace.”

During the flight test, which took place in Southern California, the Avenger used the Legion Pod’s IRST system to detect multiple aircraft operating in an area. It fed that target tracking information to the Avenger’s software, which automatically prioritised the targets and then manoeuvred the UAV to a position “for target engagement”.

IRST systems are able to determine the angle of another aircraft, but not its distance. That is unless two or more systems trade information to triangulate an opposing aircraft’s position. The Legion Pod has an in-built datalink that allows multiple examples of the sensor to perceive distance.

It is thought that in a war the J-20 would be used by Beijing to take out vulnerable support aircraft, such as the Boeing KC-46A Pegasus in-flight refuelling tanker. Without tanker aircraft it would be difficult for the USA to sustain a war all the way across the Pacific Ocean.

In March 2020, General Atomics unveiled a conceptual UAV called “Defender” intended to serve as an air-to-air missile platform for protecting large and slow-moving aircraft, including aerial refuelling tankers. That unmanned aircraft was based off the Avenger design.

“The role of this type of platform would be protection of high-value airborne assets, such as the tankers and big wing ISR platforms that comprise what the [US Air Force] calls the ‘outside force,’” Pehrson said at the time. “The outside force, with Defender ensuring safe sanctuary, would support the penetrating ‘inside force’ that operates in more-contested regions of the battlespace.”

Such an inside force would likely include stealth fighters and bombers.