As global warming melts Arctic Ocean ice pack, leaving more open water for transit by Chinese and Russian ships, Washington is looking for new ways to keep an eye on the frigid region.

One possibility: unmanned air vehicles (UAVs) that keep watch from above. 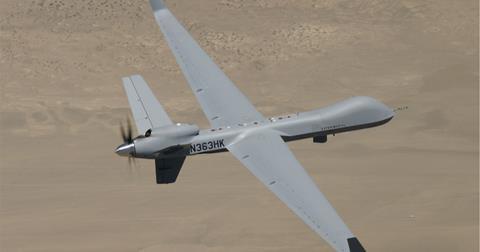 That appears to be the hope of UAV manufacturer General Atomics Aeronautical Systems, which demonstrated a modified MQ-9A Reaper flying in the high north on 7-8 September.

Operating unmanned aircraft in the remote and cold Arctic Circle is difficult. Air bases are few. Resupply is challenging. UAVs need satellites for communication and control, but most satellites are positioned far away in geostationary orbit over the Earth’s equator.

To address those challenges, General Atomics’ recent flight demonstration showcased a company-owned MQ-9A using an Inmarsat L-band satellite link. General Atomics calls the aircraft “Big Wing”, a nod to its 24.1m (79ft) wingspan, which is about 4m longer than a conventional Reaper. That extra area gives the aircraft flight endurance exceeding 43h, more than any other UAV offered by General Atomics. The manufacturer says it is ready to offer Big Wing as a retrofit or part of a new-build MQ-9A, but does not yet have a customer.

The unmanned aircraft took off from an airport near Grand Forks, North Dakota and flew to Haig-Thomas Island in the Canadian Arctic, before returning back to the mainland USA. It was a 25.5h journey covering 3,954nm (7,323km) – “one of the longest-range flights ever flown by a company MQ-9”, says General Atomics.

The ability to fly a UAV to high latitudes could be helpful in tracking Chinese and Russian activity. Both have increased icebreaker, warship and submarine operations in the Arctic Ocean. The countries are interested in drilling for oil and natural gas, and in establishing new shipping routes in the region as warming melts the previously impassable polar ice pack.

By sending ballistic missile submarines to the area, China and Russia are increasingly creating a national security problem for the USA, which must expend more resources to defend against a possible attack originating from the north. General Atomics has previously proposed using its UAVs as ballistic missile trackers and as maritime patrol aircraft.

In addition to a greater flight endurance, Big Wing has a 2,180kg (4,800lb) payload capacity, including 1,810kg worth of external store capacity. The aircraft has nine hardpoints for hanging pods and weapons, two more than the standard MQ-9A.

Big Wing has the same 24.1m wingspan as the company’s newer MQ-9B SkyGuardian and SeaGuardian UAVs – both which claim a 40h flight endurance.

Venturing into high latitudes not only requires long-endurance, but new communications technology. That is because above the Arctic Circle, or below the Antarctic Circle, UAVs have a low elevation angle relative to far-away geostationary satellites circling the equator.

A shallow transmission angle means signals must travel greater distances within the atmosphere before reaching a satellite in space. The atmosphere degrades signals.

“But L-band is less attenuated by atmosphere than are higher-frequency bands,” says Steve Gizinski, president of Inmarsat Government. “So, while signals of all frequencies degrade over distance, the L-band signal is degraded far less than higher frequencies.”

L-band antennas have wider beam-widths, so the receiving terminal also does not have to be pointed as precisely, he adds.

The MQ-9A, which is predominantly operated by the US Air Force, typically uses the higher-frequency Ku-band as a beyond line-of-sight satellite data link for flight and mission system control.

L-band satellite communications ought to expand the operating envelope of the MQ-9A, says Linden Blue, chief executive of General Atomics.

“We have enabled our [UAV] to operate in Arctic regions, over land and sea, where effective [command and control] and ISR-data transfer was previously not feasible”, he says. “As new customers come online, we want our aircraft to be able to provide them with the high-data rate surveillance and high endurance that our aircraft are known for, and be able to do so in any environment.”