General Atomics Aeronautical Systems has integrated and flown the MQ-9 Reaper with the Agile Condor pod, an on-board artificially intelligent computer that promises to autonomously find, track and propose targets to human commanders.

The first test flight took place recently at the manufacturer’s flight test and training centre in Grand Forks, North Dakota, the company says on 3 September. The pod was developed for the US Air Force Research Laboratory (AFRL) by SRC Inc., a non-profit research and development company specializing in radars and electronic warfare systems. 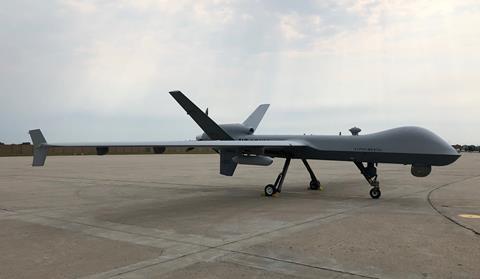 The US Air Force (USAF) wants to speed up the time it takes for a UAV to spot, identify and nominate targets for human-decision makers. However, it is swamped by an avalanche of reconnaissance data.

“Sensors have rapidly increased in fidelity, and are now able to collect vast quantities of data, which must be analysed promptly to provide mission critical information,” says SRC Inc. “Currently data is either stored on board [UAVs] and physically downloaded for review at end of mission, or the data is downloaded in-mission through a data link.”

There are limits to how much data UAVs can store on board, however.

“On-board data storage is restricted by strict size, weight and power limitations and once storage capacity is reached, the mission ends,” says SRC Inc. “Stored data also creates an unacceptable latency between data collection and analysis, as operators must wait for the [UAV] to return to base to review time sensitive data.”

Broadcasting data back to command and control centres, where there is more computing power and humans capable of analysing and acting on the information, is problematic also.

Instead, the AFRL wants to pioneer ways to quickly process data on board the MQ-9 and then pass it off to human commanders to inform their decisions. The research laboratory wants artificial intelligence programs that whittle down intelligence, surveillance and reconnaissance data to only the relevant bits.

“Instead of surveying large areas with all sensors, the [UAV] would conserve power by using only the sensors best equipped to detect anomalies over large areas,” says SRC Inc. “When a point of interest is detected, the [UAV] would then dynamically engage specialized sensors, like a camera, to collect more data and notify mission operators for further review and inspection. This selective detect-and-notify process frees up bandwidth and increases transfer speeds, while reducing latency between data collection and analysis.”

In a promotional video, SRC Inc. shows that such a system could spot a man standing on a rooftop with a rocket propelled grenade over his shoulder and identify the man as an enemy combatant using facial recognition technology – information a human commander would use to redirect an in-bound convoy of vehicles to a safer route.

Using artificial intelligence to speed up the US military’s observe–orient–decide–act loop (popularly known as the OODA loop), is at the core of the Pentagon’s future war strategy. It is seen as a more efficient way to combat terrorists as well as a means to react faster to aggression from rivals like China or Russia.

For its part, General Atomics is trying to show its unmanned aircraft can be repurposed for other missions. That’s partly because earlier this year the USAF revealed in its budget proposal a plan to stop buying the MQ-9 in fiscal year 2020. That decision came after the UAV has been shown to be vulnerable to anti-aircraft missile batteries, defences that China and Russia field in abundant numbers. In response, General Atomics has made the case the long endurance of the MQ-9 could allow it to serve a new mission as a sort of aerial sentry, watching the borders of Russia and China from above international waters.