The demonstration was conducted at Edwards AFB in California using an ISR pod mounted on a Lockheed F-16 fighter, the company announced on 8 May. The activity was performed in conjunction with the Air Force Test Pilot School. 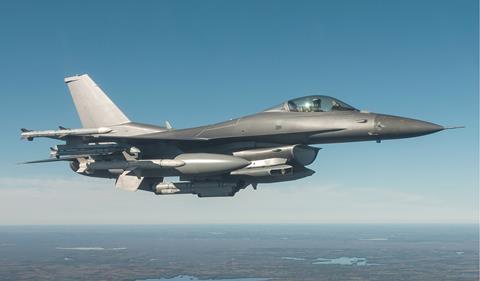 The pod was able “to detect and identify the location of the target, automatically route to the target, and capture an image to confirm the target in a simulated, denied-communications environment”, says Lockheed.

The company has not disclosed other details, such as how communications were denied, though typically that means radio jamming. Without radio communications remote pilots would be unable to direct unmanned air vehicles (UAVs) or review image data gathered.

Lockheed manufactures a variety of ISR pods for fighters, including the F-16-qualified Sniper, which can be used for air-to-ground and air-to-air targeting.

Using artificial intelligence to conduct an ISR mission could allow a UAV to push deeper into enemy airspace where communications could be limited. It could also let aircraft operate in radio silence, making them harder to detect.

Artificial intelligence-directed missions are of interest to the US Air Force. It is looking to develop software to autonomously direct loyal wingman UAVs via its Skyborg programme.

The service wants to ease fighter pilots’ ability to dispatch and direct loyal wingman. The UAVs would serve as a force multiplier for manned aircraft, autonomously gathering reconnaissance information or carrying out combat missions.