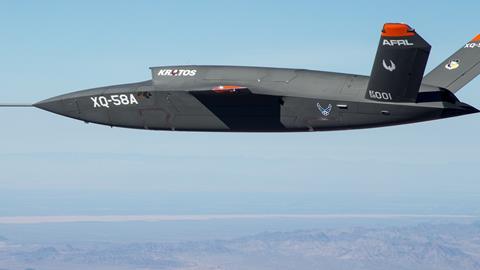 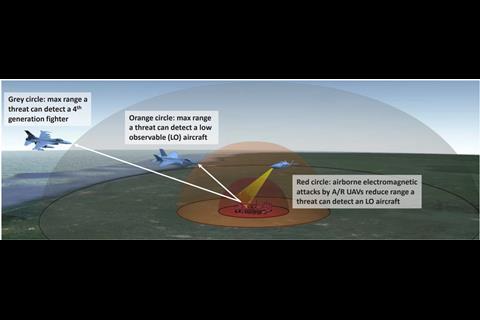 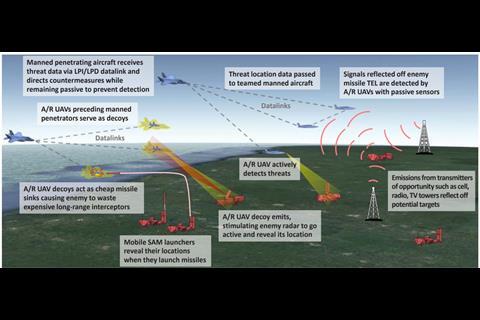 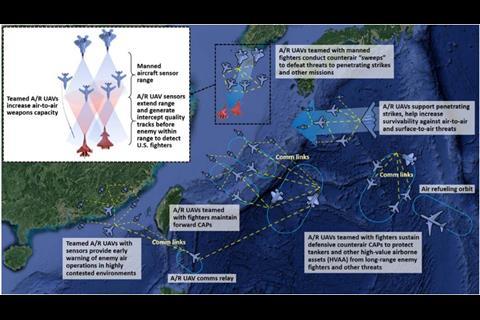 “They will not replace [the USAF’s] current requirements for [Lockheed Martin] F-35s, [Northrop Grumman] B-21s, future NGAD [Next Generation Air Dominance] and other high-end weapon systems,” Gunzinger said during a webinar presentation on 1 October. “Instead of replacing those capabilities, the maximum combat value will be realised by figuring out how to best combine the operations of this family of UAVs with manned systems. In other words, how to best leverage the attributes of both systems in the battlespace.”

Attritable UAVs are aircraft that are designed to be inexpensive enough to be lost in significant numbers during combat without breaking the bank. The USAF classifies the types as priced between $2 million and $20 million apiece.

The US Air Force Research Laboratory’s (AFRL’s) leading example of such an aircraft is its Low Cost Attritable Aircraft Technology flight demonstrator, the Kratos Defense XQ-58A Valkyrie, which would cost between $2 million and $3 million, depending on the quantity ordered.

The USAF has kept design requirements for attritable UAVs small because as aircraft get bigger they tend to cost more, says Colonel “Stryker” Haley, deputy division chief of Air Force Warfighting Integrating Capability’s Futures & Concepts Division. For example, the XQ-58A has a wingspan of 8.2m (27ft) and a dry weight of 1,130kg (2,500lb). The UAV has an internal payload capacity of 272kg.

“Given their modest payloads, these UAVs might have the greatest combat value if used for non-kinetic missions, such as electromagnetic warfare, persistent [command and control, intelligence, surveillance and reconnaissance], and other operations that can really take advantage of their force multiplying potential,” says Gunzinger.

The aircraft could also act as decoys or communication nodes.

“You can use them for multispectral decoys, not just the platform itself, but perhaps to deliver expendable decoys,” says Haley. “Think of that Russian nesting doll model, where I have this vehicle, it gets to the edge of the highly contested space, delivers a decoy, maybe instead of a missile. That starts to make it a little bit more difficult for our adversaries to target our higher cost systems like your F-35 or NGAD in the future.”

Moreover, by allowing attritable UAVs to fly ahead into contested airspace, while sweeping the horizon for enemy fighters or acting as decoys, networked manned aircraft that are flying behind could spot and fire at adversaries from greater ranges.

The UAVs could be used for some lethal missions, however. For example, an attritable aircraft could venture close to a dangerous target when releasing a precision-guided munition. That sort of mission might otherwise risk the life of a pilot. Moreover, a loyal wingman could serve as a guardian to a manned fighter, carrying air-to-air missiles and thus freeing space inside the weapons bay of stealth fighters for precision munitions.

So far, the AFRL has shown that it is technologically possible for one pilot to control and command seven loyal wingman UAVs at once, says Doug Meador, deputy programme manager of the Low Cost Attritable Aircraft Technology programme. And, despite popular perception and renderings released by aerospace manufacturers, loyal wingman UAVs and manned aircraft would not likely be flying close to one another, he adds.

“These aircraft won’t be within visual range of one another,” he says. “You can work with these aircraft with them being over the horizon.”