Israel's Meteor Aerospace is developing a medium-altitude, long-endurance (MALE) unmanned air vehicle, with the Impact 1300 to have a maximum take-off weight of 1,300kg (2,860lb). The new product is now in full-scale development, the company says.

Flight tests are due to commence by 2019, with the Impact 1300 having a twin-boom design and to be powered by an engine sourced from the general aviation sector. Meteor says it will also be available with a diesel engine alternative. 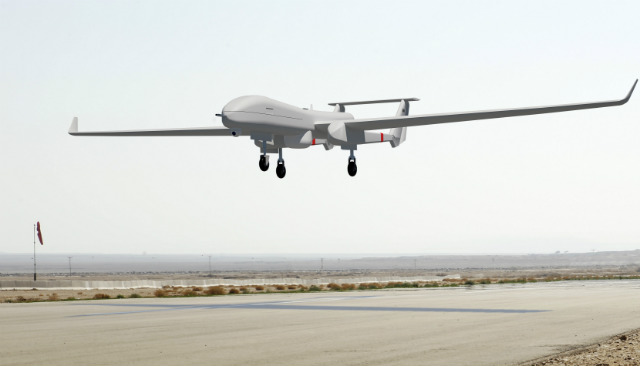 Meteor says its developmental design will be a cost-effective and flexible system, capable of operating with a wide range of sensors. The UAV has two spacious and easily accessible payload bays, it adds, with the forward one to carry electro-optical/infrared payloads and the rear for heavier equipment, such as a synthetic aperture radar/ground moving target indication capability. Retracting landing gear will ensure that belly-mounted sensors will have a wide and unobstructed field of view, it notes.

The company has not disclosed further details, but the Impact 1300 is likely to have an operating ceiling of 30,000ft, with a possible endurance of more than 30h, depending on its configuration.

Avionics, flight control and ground control systems are based on the company’s existing assets from the 730kg-class Impact 700 UAV, which is already in series production. Functions will include automatic takeoff and landing, and future growth options could include integrating large, heavy and high-power payloads and satellite communications equipment.

Company president Itzhak Nissan says the new MALE product will be unique in several ways. "We did not establish Meteor to do more of the same," he notes. "We are working to bring to the market new designs with exceptional capabilities."