The flight was the third aerial refuelling completed by the unmanned tanker, known as T1, after earlier this summer the aircraft refuelled a US Navy (USN) Boeing F/A-18 Super Hornet and a Northrop Grumman E-2D Advanced Hawkeye airborne early warning aircraft. 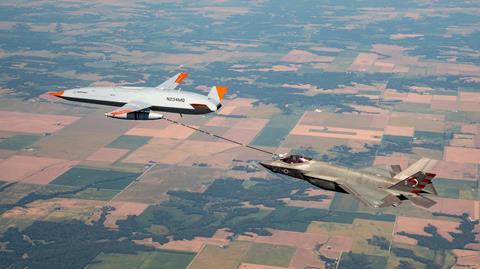 The UAV took off from MidAmerica St Louis Airport in Mascoutah, Illinois on 13 September and flew for 3h, the US Naval Air Systems Command (NAVAIR) said on 14 September. During the flight, a USN F-35C pilot performed formation evaluations, wake surveys and drogue tracking, says the service. It plugged into the MQ-25A’s hose and drogue refuelling system at a speed of 225kt (417km/h) and an altitude of 10,000ft.

“From the ground control station, an air vehicle operator then initiated the fuel transfer from T1’s aerial refuelling store to the F-35C,” says NAVAIR. It did not disclose how much fuel was transferred. The service has previously declined to say the fuel capacity of the MQ-25A.

The USN intends to have the MQ-25A refuel all carrier-based aircraft in its fleet that have a refuelling probe. NAVAIR says it needs to test how each aircraft’s aerodynamics interact with the wake of the MQ-25.

“Conducting refuelling test missions with various aircraft allows the programme to analyse data and determine if any adjustments to guidance and control are required,” it says. “To date, T1 has conducted 36 flights, providing the programme with valuable information on aerodynamics, propulsion, guidance and control in advance of the MQ-25 engineering and manufacturing development aircraft deliveries.”

NAVAIR says the T1 aircraft is now to be modified with a deck handling system ahead of a shipboard demonstration this winter. The USN has previously said operating the UAV in the tight and busy spaces of an aircraft carrier deck would likely be the most challenging part of the MQ-25A programme.

The USN plans to also explore using the MQ-25A for intelligence, surveillance and reconnaissance, electronic attack and strike missions. Those would come after the service figures out how to use the UAV for in-flight refuelling and carrier operations.

The service wants the unmanned in-flight refuelling tanker to extend the range of its aircraft, which would better enable it to operate carriers beyond the reach of adversaries’ weapons. For example, the F-35C’s 1,200nm (2,222km) range is seen as too short to strike targets within China or Russia without risking sailing a carrier too close to those adversaries’ shores.

By using a company-owned test aircraft, Boeing hopes to speed up early learning and discovery for the Stingray programme. Those insights would be used for further development and testing of engineering and manufacturing development examples of the MQ-25A owned by the USN.

The USN has said it wants the UAV to achieve initial operational capability by 2024. It plans to buy as many as 76 examples of the aircraft as part of its programme of record.