The demonstration was conducted in the Pacific Ocean in October 2020, the company said on 3 February. A manned Bell 407, which was acting as a surrogate for the MQ-8C, lifted off from Carlsbad airport in California carrying G-size sonobuoys, a receiver and processor made by Ultra of the UK.

The helicopter dropped the sonobuoys about 17.4nm (32.2km) off the coast and successfully tracked a towed-target mimicking a submarine’s characteristics, says Northrop. 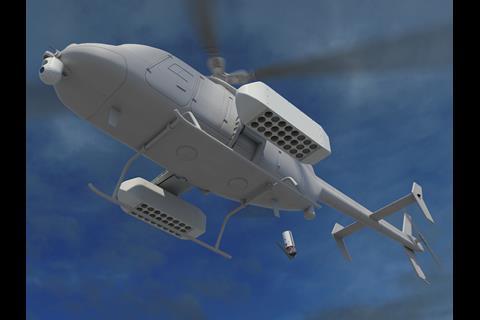 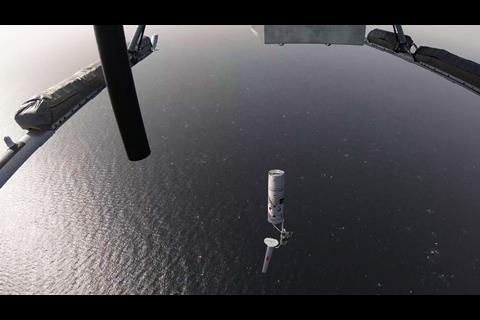 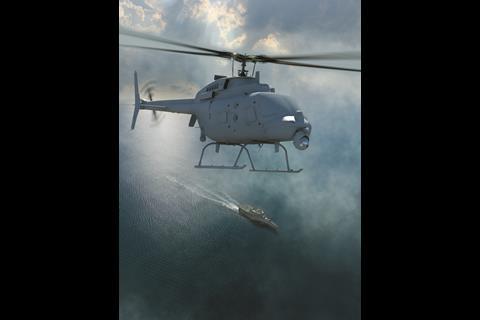 Northrop says the MQ-8C’s large fuel tank allows it to conduct large-area multistatic acoustic searches for submarines better than manned helicopters, such as the Sikorsky MH-60R Seahawk, which have shorter ranges.

The MQ-8C can carry a payload of 40 sonobuoys and using its 12h flight endurance can search an area 86.9nm from its mothership, says Northrop. The MH-60R has a flight endurance of 3.3h and carries 25 sonobuoys.

“Multistatics allows you to have a much greater buoy spacing, which gives you that ability to have a good size field that you can monitor,” says Dan Redman, Fire Scout maritime mission expansion lead with Northrop. “That won’t work with a manned helicopter because manned helicopters can’t fly that long.”

Northrop is using internal funds to push forward development of the sonobuoy system. Redman says integrating the sonobuoy pods onto MQ-8Cs deployed with the US Navy (USN) ought to be technically easier than the retrofit work the company is doing now to add the Leonardo ZPY-8 Osprey active electronically scanned array radar to the unmanned helicopter.

The USN has not made the addition of a sonobuoy deployment system a programme of record on the MQ-8C. The service has taken an incremental approach to increasing the capabilities of the UAV, which in mid-2019 reached initial operating capability.

In late 2019, the service started studying the possibility of adding precision weapons to the rotorcraft. For its part, Northrop also suggested in 2020 that its Very Lightweight Torpedo could be air-launched from the MQ-8C.