The initial example of Tokyo’s high-altitude UAV finished its first flight on 15 April at Northrop’s Palmdale, California facility, the company said on 16 April. The RQ-4B and its maritime cousin, the MQ-4C Triton, are manufactured in Palmdale. 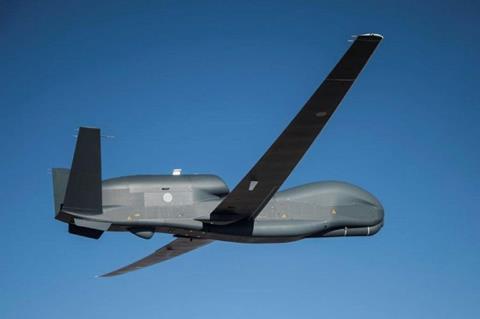 Japan plans to buy three examples of the RQ-4 Block 30(I) UAV. A Foreign Military Sales programme deal for the ISR aircraft was approved by the US Department of State in 2015.

The UAV carries a synthetic aperture radar, which can be used in bad weather or at night to gather long-range imagery. The aircraft also carries a high-resolution electro-optical and infrared camera.

The USAF’s EQ-4B variant carries the Battlefield Airborne Communications Node that allows it to act as a gateway for translating and distributing imagery, voice and tactical data between a variety of locations.