Northrop Grumman is pitching the unmanned combat air vehicle technology derived from its US Navy-sponsored X-47B demonstrator to the UK, to feed into its Future Combat Air System (FCAS) programme.

The UK Ministry of Defence began the FCAS effort in 2011 to help shape the combat system that forces would operate in the future, identifying unmanned technology as a key area of concern. Northrop Grumman is hoping to begin discussions with the MoD to encourage it to consider four key areas in its UCAV design.

The X-47B demonstrator was produced under the USN’s unmanned combat air system demonstrator (UCAS-D) programme, through which Northrop has identified the key areas of range, endurance, survivability and payload capacity as paramount for the development of this type of aircraft.

“You need to look at all four areas to get the balance that you need,” Timothy Beard, deputy director of long lead capture advanced concepts development at the company, says.

“We’re trying to get people to think about this logistically and not just take the man out of JSF [Joint Strike Fighter],” T. Scott Winship, vice president of advanced air warfare development, notes. “Without these four pillars it is useless. When the UK starts thinking about FCAS, it has to consider this. We haven’t had a meeting yet but we’re hoping to,” he adds.

“The UK is embarking on a programme… and I think we have a lot of expertise, pedigree and data on what they want to do.” 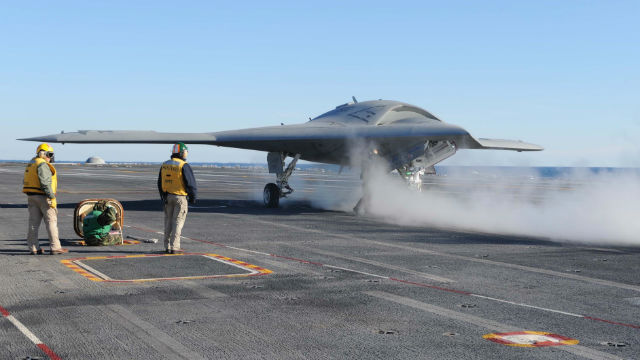 The company on 9 September pitched to the UAS conference in Twickenham, UK, a notional operation of a UCAV akin to the X-47B deploying out of Royal Air Force Waddington in the UK, which would include aerial refuelling to increase the scope of operations. The company said that air-to-air refuelling increases the endurance of the aircraft – a feature necessary for UCAV design – but the aircraft needs to have a baseline endurance of 8-10h unrefuelled as well.

Northrop stresses the importance of including stealth characteristics into the design from the offset, because they are difficult to include later on, while radar has to also be considered when developing stealth.

“Unless you can defeat all radars going in you can’t reach the target,” Beard says. “We’re not there to sell the X-47B to the UK – we’re trying to encourage the UK to consider these four areas,” he adds. “We seek to convey [to the MoD] that during your assessment you consider these four points.”

Regarding the Taranis UCAV demonstrator programme that is led by BAE Systems and supported by the MoD, Winship ackowledges that it has demonstrated elements of the requirements needed for an operational UCAV design. He points out that Taranis, X-47B and the European effort – Neuron – are all not yet operational, so could end up being successful offerings in the future.

“We’ve all demonstrated little pockets of this,” he notes.

Meanwhile, the USN’s X-47B demonstrator programme has just completed concert flights from a carrier with the Boeing F/A-18C Hornet manned aircraft, and there is still at least one more at-sea test to take place under the current funding.

The data derived from the UCAS-D programme will be packaged into government-furnished information and fed into the USN’s unmanned carrier-launched airborne surveillance and strike (UCLASS) programme. Northrop could not confirm it, but it is assumed that the data that is still being produced from the UCAS-D effort will eventually be fed back into the UCLASS programme.

The final request for proposals for the aircraft design for UCLASS is expected to be released imminently. Details are publicly limited, but the UCAV will have a 14h endurance, be operated from a carrier and provide a constant surveillance orbit up to 600nm (1,110km) away.