The firm is on contract to deliver five RQ-4 Global Hawks to NATO under the Alliance Ground Surveillance (AGS) programme, and is now in discussions with some individual nations – namely the UK and Norway – to help shape their requirements for a high-altitude surveillance system.

Fifteen nations are currently involved in the AGS development, although all 28 NATO members will benefit from the use of the five systems - based out of Sigonella air force base in Sicily - when required. As a result, they will be exposed to the surveillance platform and the potential it has to meet sovereign requirements. Flight testing will begin next year while initial operational capability for AGS is expected in 2017.

“This is not going to suit every nation,” says Andrew Tyler, chief executive of Northrop Grumman UK and Europe. “But I see NATO AGS as a stepping stone for a lot of them.” 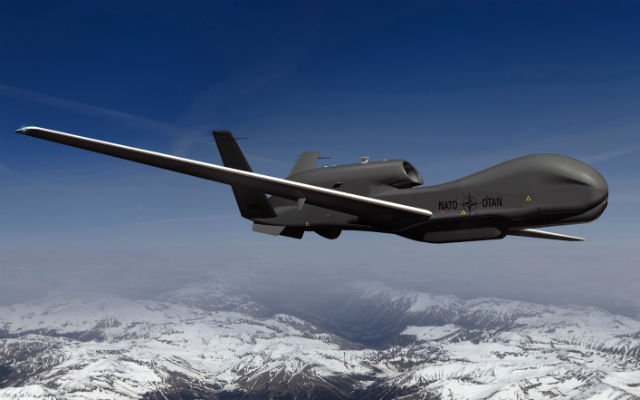 Tyler says there are no official programmes of record for HALE UAVs in the UK or Norway. However, the nations' relatively healthy defence budgets and the scope of land they have to monitor makes having this capability appealing. In addition, both nations were exposed to the system when a Global Hawk flew during NATO's Unified Vision exercise in Norway in May, during which the aircraft flew in UK airspace.

“In our estimations they both have a latent requirement for [HALE UAVs],” Tyler says.

The UK has a maritime patrol capability gap following the retirement of its BAE Systems Nimrod MRA4 programme in 2011. It is expected London will commit to the acquisition of a new capability when its next Strategic Defence and Security Review is released in May 2015, although it is unclear in what guise this will appear.

It is assumed the UK would desire the Boeing P-8 Poseidon maritime patrol aircraft, although whether or not it will commit to the high cost of the acquisition is uncertain.

Another option would be to acquire a mix of P-8s and the MQ-4C Triton – a maritime UAV derived from the Global Hawk – to meet the requirement. This is a combination both the US Navy and Australia have committed to.

Northrop acknowledges that Germany – which is heavily involved in the AGS programme – also has a requirement for a sovereign HALE capability. The company was contracted to deliver a tailored variant of the Global Hawk – the Euro Hawk – to Germany, but the programme was not extended past the first phase.

The Euro Hawk was also caught up in a political scandal that resulted in Germany’s then-defence minister leaving his position over issues including high budgets.

However, Northrop claims the programme – which produced a Euro Hawk aircraft that is currently in Germany – could still be revitalised. The company says it is in dialogue with the country to help define what it could want from the development in the future.

“The German government still has a requirement,” Tyler says. “Discussions are fast moving at the moment. We left it in a good state.”