WB Group company Flytronic showcased its 110kg (243lb) FlySAR design, which is described as having a flight endurance of 15h. The first of three air vehicles was flown for the first time on 18 April, under a project launched in mid-2013 and financed by the Polish National Centre for Research and Development. 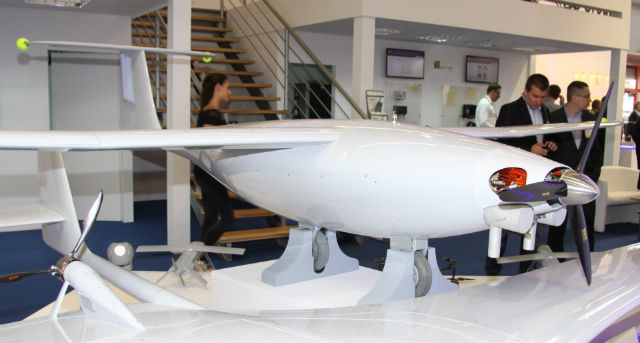 Powered by a 4hp (3kW) piston engine and with a wingspan of 5.7m (18.7ft), FlySAR has a maximum speed of 86kt (160km/h). The FlySAR is intended to carry sensors weighing up to a combined 45kg, including a synthetic aperture radar payload designed by the Military University of Technology in Warsaw. Other applications could include gathering signals intelligence.

Poland’s military is viewed as a potential launch customer, although Flytronic vice-president Wojciech Szuminski says an undisclosed foreign customer is also looking at the system to patrol airspace over a national park as part of counter-poaching operations.

Meanwhile, WB Electronics displayed a loitering munitions concept named Warmate. The system will have a maximum weight of 1-2kg, including a warhead weighing up to 0.6kg, and can also be equipped with an electro-optical/infrared sensor turret.

Also making its debut was the short-range E-310, which was flown by partners PIT-Radwar and Eurotech for the first time on 24 June. 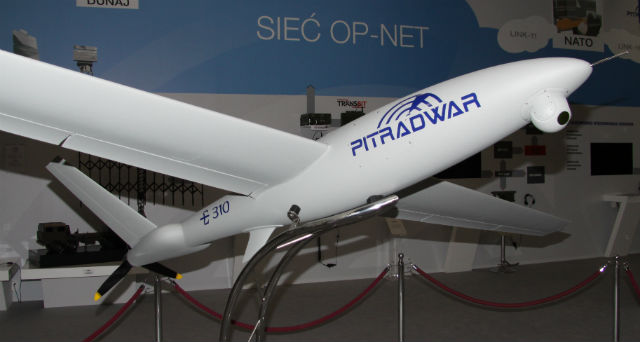 With a maximum take-off weight of 75-80kg, including a 25kg payload, the 5.4m-wingspan aircraft has an expected top speed of 97kt. Its endurance is projected as up to 15h, although its current piston engine should be replaced by an electric hybrid.

A secure datalink will transmit information to a ground operator and payload controller, with the system also planned to be capable of performing autonomous flights.

Meanwhile, the Polish Air Force Technology Institute (ITWL) will support flight tests of the Airbus Defence & Space Atlante UAS from Deblin air base in late September. The design is being offered for reconnaissance and search-and-rescue tasks, but could also be equipped with precision-guided weapons.

ITWL would provide the Atlante’s sensors and act as systems integrator in the event of a Polish selection, with the UAS to be manufactured at an Airbus facility in Warsaw.