In a ceremony held at Murai Camp, defence minister Ng Eng Hen said: “The FOC of Heron 1 brings the RSAF’s unmanned aerial capabilities to the level of advanced militaries globally.”

Flown by the air force’s 119 and 128 squadrons, the Heron 1 can “perform several missions simultaneously, with a suite of state-of-the-art sensors and enhanced range [and] can also be deployed against terrorist threats,” Hen says.

He says the service has “validated the platform’s advanced capabilities in high-end exercises both at home and overseas, including its target acquisition and cooperative lasing capabilities, to allow RSAF pilots to engage targets more effectively”. 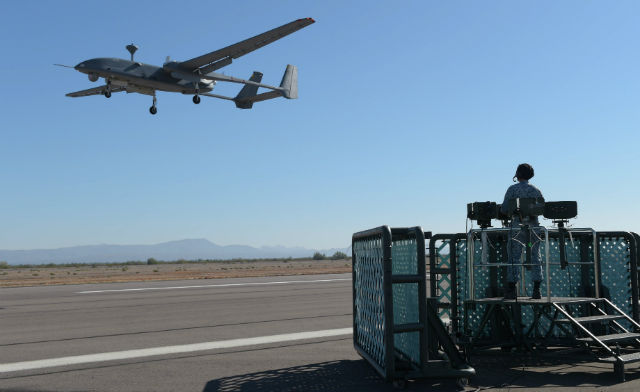 Singapore’s Heron 1s are replacing its IAI Searcher UAVs, which have been in service since 1994. Industry sources suggest that Singapore could potentially seek to purchase additional Heron 1s in a maritime patrol configuration, with its air force having recently been briefed on the advanced capability.

Israel’s air force is increasing the number of its Heron 1 “Shoval” UAVs configured for maritime surveillance tasks, and also working to introduce an automatic take-off and landing capability.

The latter activity is being performed with the help of the service’s flight test squadron in two phases. The first will enable the Heron 1 to taxi to the runway autonomously, and the second support take-off and landing with the assistance of an “outside pilot”.