Skydweller Aero, a start-up developing a long-endurance, solar-powered unmanned air vehicle (UAV), has raised $8 million in additional Series A funding and signed an agreement to use Palantir’s Foundry artificial intelligence (AI) program to analyse data gathered by the drone.

The recent funding will be used to further the high-altitude, long-endurance aircraft’s autonomous systems, as well as push forward development of the next Skydweller prototype, the company said on 9 September. 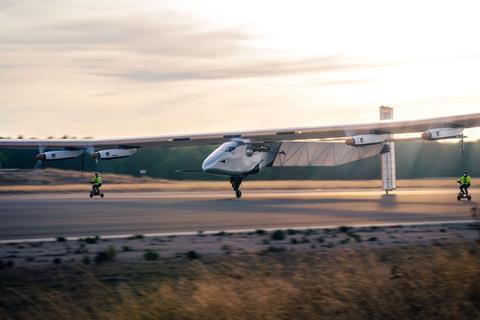 The Series A funding round was led by aerospace manufacturer Leonardo, investment firm Marlinspike Capital, and merchant bank Advection Growth Capital. In total, the aerospace company has raised $40 million for its Series A round. Palantir is also an investor.

In August, the US Navy awarded Skydweller Aero a $5 million contract to demonstrate its UAV. The aircraft uses technology developed for the experimental Solar Impluse 2, a crewed solar-powered aircraft that circumnavigated the Earth over the course of 2015-2016. The US-Spanish start-up acquired the right to use the technology in 2019.

The Skydweller UAV, which does not yet have a formal name, first flew in December 2020. It has made multiple additional flights since and is incrementally working toward autonomous flight, the company said in August.

Skydweller Aero says its UAV could fly for 30-90 days, depending on its mission’s latitude, which determines the intensity of sunlight and the amount of power that can be generated by its solar panel-lined wings.

The company says the aircraft could be used for a variety of missions including intelligence, surveillance and reconnaissance, communications relay, natural disaster support and environmental monitoring and geospatial mapping.

Skydweller Aero plans to use Palantir’s Foundry machine learning software to quickly analyse large amounts of data, in particular for “multiple intelligence” uses, the practice of fusing different types of data to provide a fuller operating picture for military personnel. For example, signals intelligence sensors and synthetic aperture radar might be combined to locate a radar-guided surface-to-air missile site.

The Foundry program will be hosted onboard the Skydweller UAV, allowing for “edge” computing. Edge computing aims to process information closer to the source of collection, reducing the time needed to analyse information by not needing to transmit it back to a ground station or another aircraft.

“As an example, Skydweller might use Foundry to rapidly train and fine-tune an [AI] model to detect a specific type of vessel based on data from multiple onboard and off-board sensors,” says Akash Jain, chief technology officer for Palantir.

Multiple branches of the US military are interested in high-altitude, long-endurance UAVs such as Skydweller as a means to get a more persistent, far-sighted look at certain areas of the world. The type fills a gap between satellites and medium-altitude, long-endurance (MALE) UAVs, such as the General Atomics Aeronautical Systems MQ-9 Reaper. A satellite’s vision can be obscured by cloud cover and has orbits that adversaries can predict and hide from. MALE UAVs cannot stay aloft for as long and cannot see as far, due to their lower operating altitude.