Its sensor detects the electromagnetic field of a nearby power line and uses software to automatically direct the UAV to change its flightpath away from a collision, the service said on 19 August. 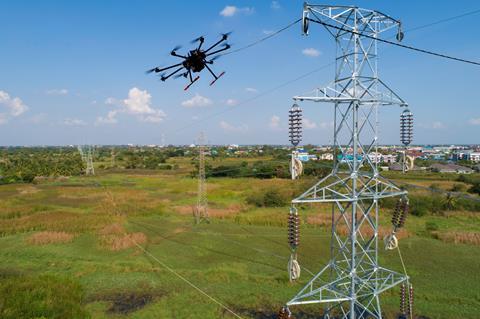 “Power lines are small and difficult to see with radar or optical sensors, but they generate large fields that can be easily detected with low-power, low-cost, passive electric- and magnetic-field sensors,” says army researcher David Hull.

The ability to detect the directional flow of nearby electric fields could also allow UAVs to navigate alongside power lines.

“This technology has significant dual-use potential and is expected to offer the military a better means for ground and air-based vehicles to avoid electric power lines when moving,” Hull says. “It is also useful for mapping out power grids or locating damaged wires, after a hurricane, or as part of a nation-building effort. The same technology is beneficial to power companies that require routine and emergency inspection of many miles of power lines to detect tree encroachment, excessive sag and other issues.”

The US Army claims existing wire detect-and-avoid technologies that rely on radar or optical sensors are too bulky, expensive, technically limited and power-hungry. Instead, it says improvements have been made with its electromagnetic detection system by relying more on software.

“The detection algorithm developed at the lab will result in size, weight, power and cost reduction,” says the service.

As an increasing share of the world’s population moves to cities, the US Army envisions future battlefields will also likely be in urban settings. The service plans to use UAVs for intelligence, surveillance and reconnaissance missions inside cities and says having the ability to detect and avoid power lines would be useful.

The US Army Research Laboratory has also licensed its power line detect-and-avoid technology to Manifold Robotics, a start-up with an unmanned surface vehicle that does surveying work for commercial customers. The company wants to further develop the technology to survey power line locations to help other UAVs navigate around or nearby.

“With the rapid proliferation of drones for autonomous applications, we imagine that freight delivery companies may also be able to leverage our technology and transform power line rights-of-way into superhighways for drone freight deliveries,” says Jeff Laut, Manifold Robotics’ chief executive.

The technology could also be used for autonomous power line inspection, the company says.