The US Air Force Academy is attempting to teach autonomous unmanned air vehicles when to perform combat manoeuvres used by fighter pilots to counter potential swarms of adversarial UAVs.

The activity builds on a US Defense Advanced Research Projects Agency-sponsored unmanned air systems swarm competition staged last year between the US Military Academy, Naval Academy and Air Force Academy, says Del Christman, assistant professor at the USAF Academy, who leads research on the project. During that competition, student fixed-wing and quadcopter drones autonomously shot a virtual weapon to hit a sensor on an opponent’s UAV in flight. 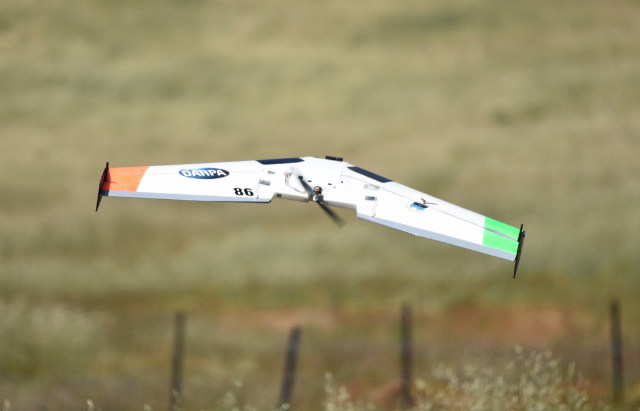 The USAF Academy believes it can improve the combat effectiveness of UAVs by teaching the aircraft when to make certain air combat manoeuvres, such as the Split S, Immelmann, Scissors, High and Low Yo-Yo, and Lag Displacement Roll, according to Christman's presentation at the AUVSI Xponential conference in Denver, Colorado.

"We are trying to do full-up 3D fighter-like combat movements," he says. "All of those things you'd see when two fighters are mixing it up."

Most UAV autopilot programmes cannot perform these manoeuvres, so the Academy is working on developing supplemental autonomous capabilities on board drones.

"You have to go into some sort of rate mode or acro mode in the autopilot," Christman says. "Or, we’ve been looking into ways to let the autonomy itself fly the airplane, say: 'Hey, I’ve got the stick. Let me handle this real quick'."

The Academy is also working to teach drones how to fly in pairs as wingmen, utilising the same offensive and defensive tactics that aircraft pilots use when they support each other in combat. Eventually, such autonomous capabilities might be useful in downing an adversaries' drones, Christman believes.

"As we progress year by year we may be able to come up with a drone that can counter small UAS with some kind of kill mechanism: either it's electronic, or capture, or kinetic," says Christman.

The Academy is programming individual drones to make decisions autonomously, while the larger fleet has its mission objectives set by a swarm commander. "All of these decisions are made on board with very basic consensus algorithms," Christman says. "We have a number of different factors. All are weighted in some way. These weights can be changed in real time by the swarm itself, or they can be changed by the swarm commander."

For instance, a swarm commander might want to reduce the importance that an individual UAV gives to self-preservation in certain situations to help accomplish an overall mission.

The Academy is also looking at different ways for swarm commanders to oversee the flights of dozens of autonomous drones at once, and has found that the most effective way is via virtual reality, he says.

"We are finding in 3D – .because that's how we normally interact with the natural world – I can track 30 or 50 [objects] and pretty much have a sense where everyone is."