The US Air Force Research Laboratory (AFRL) plans to flight test its Skyborg autonomous aircraft technology during Orange Flag exercises this summer for the first time.

The AFRL has previously said tests would take place in July 2021. Participation in the Orange Flag exercises was previously undisclosed. 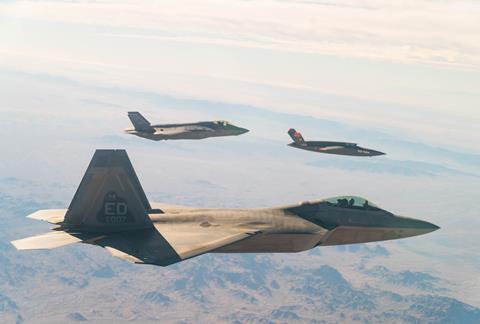 “The Skyborg capability isn’t going to be a weapons school graduate wingman any time soon,” she says. “We are looking to take the components of the autonomy, fly it in some very rigorous test capabilities, such as the Orange Flag flights coming up this summer, and then look to slowly add capabilities, measure, learn from our successes, and then keep the programme going.”

Orange Flag exercises are intended to test the interoperability of US Air Force (USAF) fighters, bombers and command-and-control aircraft. The event focuses on developmental and operational testing of new technologies. US Navy and US Marine Corps aircraft also participate.

Skyborg is to be integrated into “attritable” unmanned air vehicles (UAVs) – unmanned aircraft cheap enough to be lost to combat attrition. Boeing, General Atomics Aeronautical Systems and Kratos Defense & Security Solutions are contracted by the AFRL to develop prototypes.

Pringle does not say which UAV Skyborg will be tested on this summer. Platforms could include the Kratos XQ-58A Valkyrie, an early AFRL demonstrator of the attritable UAV concept. General Atomics also received a contract in January to modify two of its company-owned Avenger UAVs with Skyborg.

In December 2020, a USAF Lockheed Martin F-22 Raptor, F-35A Lightning II and an XQ-58A Valkyrie flew in formation for the first time at the US Army Yuma Proving Ground in Arizona. They were attempting to demonstrate inter-aircraft data transmission using a novel technology called “gatewayONE”, but the XQ-58A was unable to link up.

The F-22’s and the F-35’s most-secure communication systems cannot pass data between the types due to incompatibility. The F-35 uses the Multifunctional Advanced Data Link and the F-22 uses the Intra-Flight Data Link. The gatewayONE device was envisioned as a way to pass information between the types.

Early attritable UAV designs, such as the XQ-58A, are influenced by lightweight jet-powered target drones – small UAVs that have limited weapon payload capacity. Because of size limitations, the USAF might initially use attritable UAVs as non-kinetic “force multipliers”, according to US think tank the Mitchell Institute. The UAVs could be used as decoys or communication platforms, or deployed on missions involving electronic warfare, persistent command-and-control, intelligence, surveillance and reconnaissance.