UK investigators have determined that a fatigue crack in the nose-gear axle of a Ryanair Boeing 737-800 caused one of the wheels to detach on take-off from London Stansted.

The left axle of the inner cylinder failed as the jet (EI-DLV) turned onto runway 22 in preparation for a departure to Copenhagen on 15 September last year. It diverted to East Midlands airport.

Air Accidents Investigation Branch (AAIB) analysis found that the axle journal, while being overhauled, had sustained a re-tempering burn during post-chrome plate grinding. 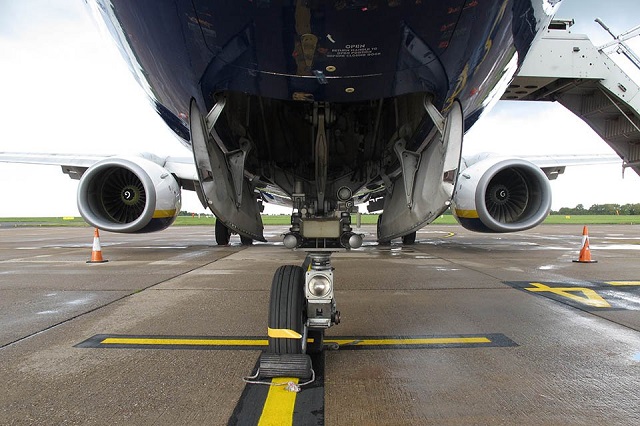 This would have resulted in heat-induced cracking in the base metal, it states, which “probably” grew through hydrogen embrittlement cracking during cadmium plating.

Visual inspections did not detect the presence of any cracks in the chrome surface – which, in any case, would have been microscopic – and there was no requirement to conduct an inspection with fluorescent dye.

“Because no cracks were detected, the part was returned to service,” says the inquiry. “Over time, in-service axle flexure caused fatigue cracks to initiate from the hydrogen embrittlement region, and propagate through the wall of the axle.”

It states that, while the cause of the original grinding burns could not be determined, there was “no effective mechanism” for detecting them.

The cylinder involved had previously been installed on a different 737-800, line number 1642, and had accumulated nearly 22,100 cycles since new.

It had been overhauled in December 2014 at just over 17,000 cycles before being installed on the aircraft involved in the incident.

Since the failure, says the inquiry, the maintenance and overhaul organisation has introduced another inspection procedure specifically to identify any journals which have suffered grinding problems.