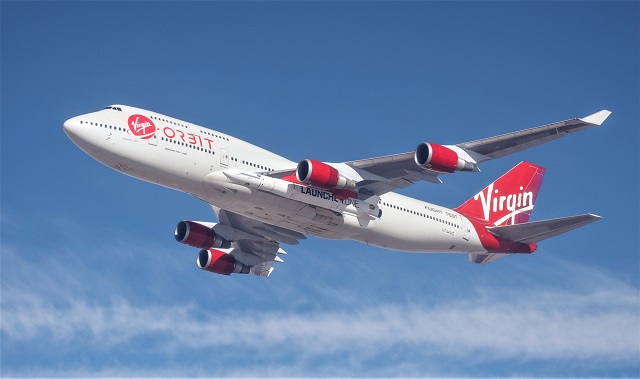 The test by Richard Branson’s small-satellite launch company was designed to prove the feasibility of using the ex-Virgin Atlantic 747 N744VG (ex- G-VWOW) to launch the two-stage rocket. The system uses the existing “fifth-pod” engine-pylon attachment points on the underside of the wing.

The 1h 20min test flight from Victorville, California moves Virgin Orbit a step closer in its plan to reach orbit in early 2019, says chief executive Dan Hart. “[This is] a major step forward in our quest to bring a new capability to small satellite launch,” he adds.

The flight was used to assess the 747’s take-off, landing, and low-speed handling and performance of the integrated system.

“The vehicles flew like a dream,” says Virgin Orbit Chief Pilot Kelly Latimer. “Everyone on the flight crew and all of our colleagues on the ground were extremely happy with the data we saw from the instruments on-board the aircraft, in the pylon, and on the rocket itself.”

This marks the start of a new phase in Virgin Orbit’s 747 flight-test campaign, which will involve several more sorties - some with and some without a LauncherOne rocket attached.

Further trials will conclude with a drop-test, during which a rocket will be released without igniting. Virgin Orbit expects its first space shot will be undertaken early next year.