The crew and the aircraft belonged to the USAF’s 56th Rescue Squadron, operating from RAF Lakenheath, UK.

According to a report into the accident compiled by the service, the crew was on a training sortie described by the USAF as “a night-time rescue scenario of a downed F-16 pilot on grass-covered marshland near Cley-next-the-Sea”.

Following the birdstrike by a flock of geese the aircraft went out of control and crashed, causing the death of all four on board. 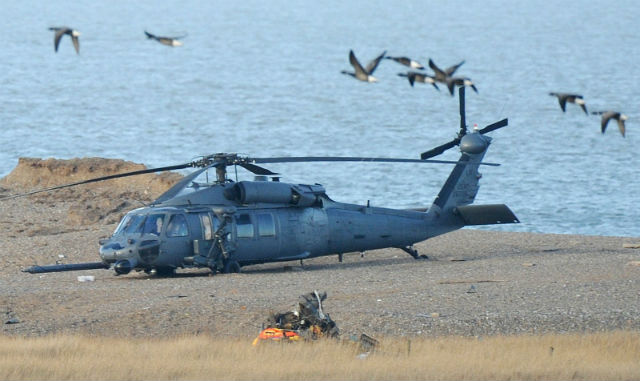 The USAF says it found “clear and convincing evidence” that the aircraft was brought down after sustaining “multiple bird strikes” which rendered “ the pilot and co-pilot unconscious and disabling the trim and flight-path stabilisation system”.

All crew on both aircraft wore night vision goggles. The accident aircraft departed RAF Lakenheath at 17:33 local time “and proceeded to an initial point to verify the status of the simulated downed pilot and conduct threat analysis”.

To avoid noise nuisance to the local community, the crew chose a new initial point for the rescue run, and the aircraft was flying at 110ft above ground level at 110kt (204km/h) when the birdstrike occurred.

The report says the birds, probably disturbed by the aircraft noise, got airborne and crashed through the windscreen rendering both pilots and the aerial gunner unconscious as well as causing system damage. The aircraft then descended and crashed.